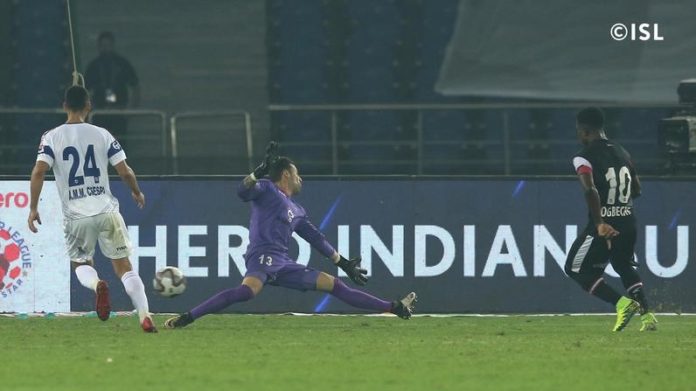 Northeast United FC continued their fine form in Hero Indian Super League by walking away with maximum points against Delhi Dynamos in their own den. It looked as if the game would end in a stalemate before Federico Gallego broke the deadlock at the 82nd minute. Bartholomew Ogbeche registered his name in the scoresheet in the dying embers of the game to continue his stupendous striking form.

The match embarked with an end-to-end action as both the sides could have drawn first blood within the first ten minutes. It looked as if the visitors had won a penalty at the 25th minute when Marti Crespi tripped Ogbeche, but the referee waved off the protests. Northeast United FC came agonizingly close to score several times in the first half, but they squandered their opportunities in the final third every time.

As the teams came out from the tunnel, it was Delhi Dynamos who were on the front foot. However, like their adversaries, they too let away a lot of chances. Northeast United FC paid them dearly as Gallego’s low-lying shot, after dribbling past a defender, went past Dorronsaro.

Pritam Kotal’s blunder gifted Northeast United FC another goal at the 93rd minute. Gallego dispossessed him and went goalwards. He could have had a shot at glory himself, but spotted the unmarked Ogbeche’s run and laid the ball on the platter for him. The former Paris Saint Germain striker made no error and hit the final nail in the coffin.

With this win, Northeast United FC pip FC Goa to surge to the top of the table, albeit playing a game extra. Tomorrow’s game would see Bengaluru FC taking on former two-time champions ATK in the latter’s home ground.