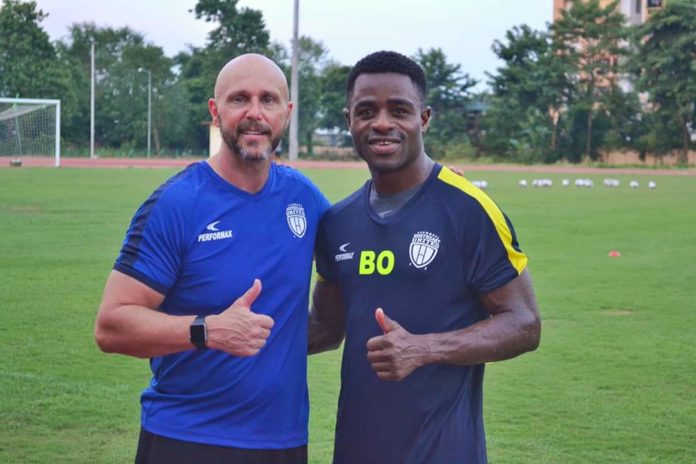 Northeast United have pulled off a great victory in the thrilling contest against Chennaiyin FC which has ended with a scoreline of 3-4 in favour of the Highlanders at Jawaharlal Nehru Stadium in Chennai. With this win Northeast United remained unbeaten in this edition of Indian Super League and the Highlanders moved to the top of the table with 7 points in three matches so far. On the other hand, the defending Champions Chennaiyin FC have now lost all their three matches in this season.

The match has begun with an own goal of Rowlin Borges which has given Chennaiyin FC at the 4th minute of the match. The home team have doubled the lead when Thoi Singh brilliantly followed the pass of Issac Vanmalsawma and placed it at the bottom corner of the Goal just 10 minutes later in the match. Pawan Kumar had no chance to save that ball going into the Goal. Bartholomew Ogbeche has pulled one goal back at the 29th minute of the match. But Thoi Singh again doubled the lead in favour of Chennaiyin FC with a brilliant turn in the penalty box. After that it was completely a show dominated by Bartholomew Ogbeche. The 34 year old Nigerian centre forward has completed his Hat-Trick with two goals at 37th and 39th minute of the match to make the scoreline 3-3 at the end of the first half.

After the thrilling contest in the first half, both the coaches have tried to strengthen their defensive unit. At the 54th minute of the match,Rowlin Borges has picked a ball from just outside of the box and placed it brilliantly as Karanjit Singh had no chance to save it. Chennaiyin FC have tried really hard to make the scoreline level; but the finishing skills of their attackers were poor in the second half of the match. The match has ended with a scoreline of 3-4 in favour Northeast United. The Highlanders will now face Jamshedpur FC after one week while Chennaiyin FC will lock their horns against Delhi Dynamos in the next game week.