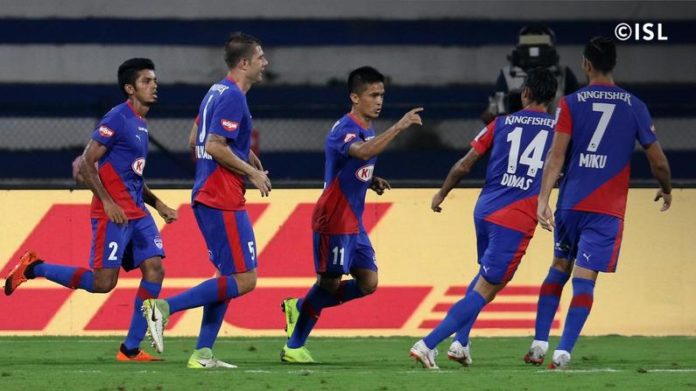 Bengaluru FC and Jamshedpur FC shared the spoils in an end to end contest at the first-ever steel Derby of ISL 2018-19. With this result, five teams sit on top of the table with four points on their bag.

Udanta Singh sprinted down the right flank to meet a brilliant defense-splitting pass from Erik Partaalu at the 12th minute. However, the 22-year-old’s cross was weak and got cleared by Tiri. Jamshedpur FC found themselves in a similar predicament when Jerry’s cross was wayward and went out for a throw-in. The game slowly converted into a chess match as both the sides resorted to capitalize on the counter and set pieces.

Finally, the deadlock was broken at the 45th minute when Nishu Kumar curled the ball into the back of the net from just outside the penalty box.

Bengaluru FC looked menacing at the onset of the second half and created a lot of half chances, however, it was Jamshedpur FC who got the next goal when 16-year-old Gaurav Mukhi equalized for the away side at the 81st minute. The joy was short-lived as Sunil Chhetri’s wonderful header put Bengaluru FC in the driver’s seat courtesy of a brilliant cross from Harmanjyot Khabra. It looked as if Bengaluru FC would walk away with the three points but Sergio Cidoncha spoiled their plans.

The final scoreline read 2-2 in what was the most exciting game of ISL season 5 so far.