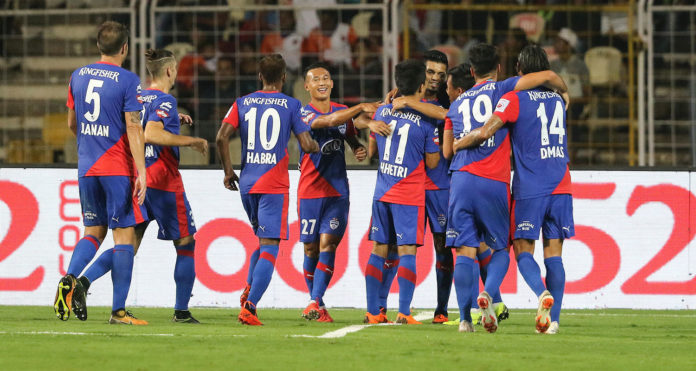 Bengaluru FC edged out FC Goa FC Goa 2-1 in a topsy-turvy top of the table encounter at the Fatorda Stadium in Goa. This victory takes the former ISL finalists level on points with the Gaurs, and only behind them on goal difference. Moreover, Bengaluru FC have played two games less than the league leaders and are the only team unbeaten in the competition.

The home side could have taken the lead at the 10th minute when Juanan’s mistimed clearance off Carlos Pena’s efforts fell in the path of Hugo Boumous. The 23-year-old’s shot was, however, saved by Gurpreet as he narrowed the shooting range.

Bengaluru FC slowly grew into the game and were rewarded at the 34th minute when Rahul Bheke flicked Xisco’s half-volley goalwards. Mohammad Nawaz was left wrong-footed and couldn’t stop the ball from rolling towards the back of the net.

The misery piled up on FC Goa after half-time as the referee showed Mohamed Ali a second yellow for needlessly handling the ball from a throw-in. The away side, too, were reduced to ten men as Dimas Delgado’s high boot hit Boumous in the chest. The referee showed no hesitation in giving him the marching orders.

The game became an end-to-end affair and FC Goa equalized at the 72nd-minute. Coro passed the ball towards Brandon Fernandes inside the penalty box, whose thunderous shot took Nishu Kumar’s deflection to find the back of the net.

The joy was short-lived as the captain Sunil Chhetri headed home Udanta Singh’s cross five minutes later to put Bengaluru FC on the driving seat. Sergio Lobera threw the kitchen sink as he brought in Mandar Rao Desai, Manvir Singh, and Edu Bedia in place of Brandon Fernandes, Jackichand Singh, and Carlos Pena all at once.

Apart from Manvir’s two spirited shots, the substitutions bore no fruits as Bengaluru FC held on the slender lead. Tomorrow, Mumbai City FC will take on ATK in the former’s home ground.