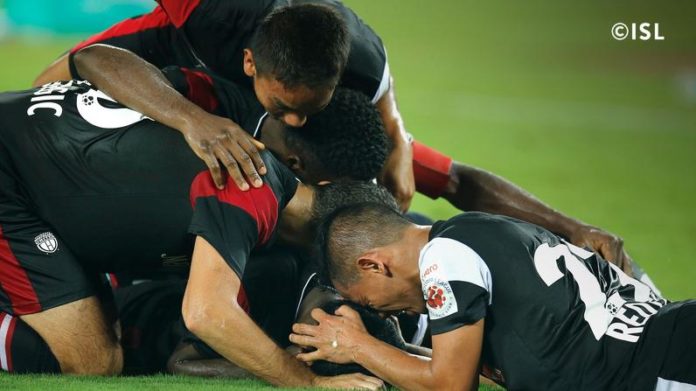 Northeast United FC traveled to the City of Joy to take on ATK on the first match of round 2 of Hero Indian Super League 2018-19. Steve Coppell fielded an unchanged side despite the team suffering a 2-0 loss to Kerala Blasters FC on the opening fixture. Meanwhile, Eelco Schattorie brought in Robert Lalthlamuana in place of the injured Keegan Perreira on the left back position.

Northeast United FC could have taken the lead at the 3rd minute itself when Jose Leudo released Nikhil Kadam wonderfully in the left flank. The 24-year-old’s cross was met by Redeem Tlang who sent the ball rolling towards an onrushing Federico Gallego. The Uruguayan’s shot, however, was blocked away by Gerson Viera who had come from behind.

Both the sides put pressure on each other but failed to create any clear-cut goalscoring chance. At the 33rd-minute, the referee Tejas Nagvenkar showed a second yellow card to Sena Ralte for taking out Nikhil Kadam. The ATK players had protested a little, but Ralte didn’t show any signs of worry as he knew he deserved it.

Northeast United FC continued piling pressure on the home side, but John Johnson and Gerson Viera did well enough to avert any danger on both the halves. ATK, meanwhile, gave away possession extremely cheaply in the midfield and looked content had they had an option to get away with a point. However, ATK did create some good chances from the set pieces but suffered due to poor finishing.

Northeast United FC had finally broken the deadlock in the 88th minute when Rowlin Borges got away from his marker and cushioned the ball at the back of the net from a corner kick. The away side, surely, deserved the three points. On the other hand, one has to pity John Johnson who was unlucky to be on the losing side. If it weren’t for him, ATK would have lost by a margin of three goals or more.