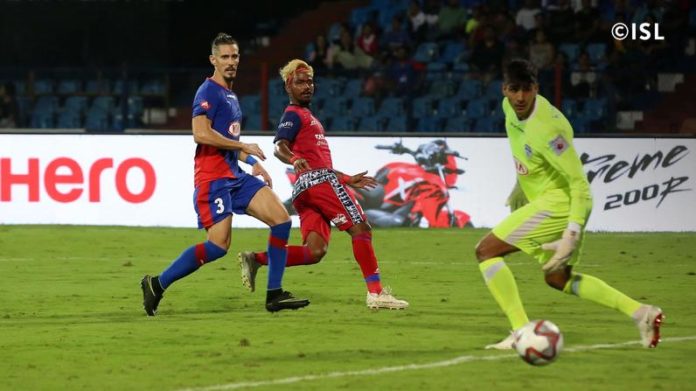 History was created on 16th of October, 2018 when Gaurav Mukhi came off the bench to score his first goal and became the youngest goalscorer of the tournament in the process.

Bengaluru FC were leading 1-0 courtesy of a Nishu Kumar stunner, and Jamshedpur FC looked devoid of any ideas to get back to the game. Cesar Ferrando bought in the 16-year-old at the 71st minute in place of Jerry Mawihimingthanga, who was already on a yellow card. A minute later the Jamshedpur FC gaffer replaced Tim Cahill, a striker, with Carlos Calvo, an attacking midfielder, and thus, Gaurav was entrusted to lead the pack.

He got his shot into limelight ten minutes later when Mario Asques sent in a long ball. Gurpreet and Albert Serran got fooled by his boyish innocence when they allowed the young lad to latch onto the pass unworriedly. Gaurav punished them both as he calmly slid the ball, and it rolled to the back of the net.

He could have given Jamshedpur FC the lead at the 86th minute when he dribbled across Rahul Bheke and found himself in a good crossing position. However, the 16-year-old couldn’t control his adrenaline rush and the ball went flying across the crossbar.

Sunil Chhetri scored a fantastic header at the 88th minute and Sergio Cidoncha restored parity for the away side at the 94th minute as the final scoreline read 2-2. However, the crowd would remember neither of the other three goals as Gaurav Mukhi announced his arrival to the Indian football scene on that day.