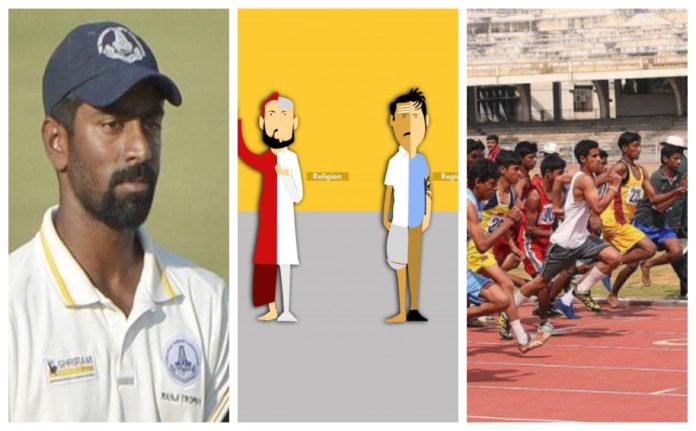 A butterfly effect was needed to understand the state of the athletes in India subjected to racism. Right from the unfortunate death of George Floyd to Darren Sammy’s divulgence, it took such incidents and their outbreak to understand the degree of racism in India. While plenty have gone onto take initiative for the protests in the United States, the racism right under their noses goes unnoticed much to the plight of the Indian athletes experiencing it.

It is not hard to believe that racism exists in this country which is one thick glistening blob of culture, languages, ethnics, and beliefs. But it is hard to wrap one’s head around the fact that such behaviour is tolerated and ignored even in these modern times.

It took a foreign cricketer in the form of Darren Sammy to bring this issue into light by digging up an experience from seven years ago, which shows how the people of India are so deeply ignorant about this rattling issue.

Right from team selections, to practice sessions, to the actual game, racism exists in India, be it any sport. Racism has nested casually so deep into the entire sporting framework and in the minds of the ignorant that they have moved deep into denial.

While many may argue that not all racial slurs are offensive and some are just coming from a good place, this is the mindset that needs change. The fact is that there is absolutely no need to brand a person with a racial slur no matter how apt it seems. There are enough adjectives in language vocabulary to describe a person and it should not be a racial slur.

This is exactly what happened with Darren Sammy, after being subjected to the calls of “Kalu” during the course of his stint with the Sunrisers Hyderabad. Ultimately, the all-rounder decided to let things go after learning that it came from a good place. Interestingly, Sammy, who is clearly the victim in this case, became the culprit after the fans dug up an old tweet where he is seen referring himself with that same slur. While clearly not knowing the meaning, the people were not sympathetic to him.

This is how casual racism has become, not only it is being used, but the people are having a hard time differentiating between the victim and the culprit. The comments on the cricketer’s Instagram posts speak for themselves.

Cricket, the apple of the eye for many, the pinnacle of Indian sports, is unfortunately contaminated with racism. Former Indian all-rounder Irfan Pathan claimed that the colour of the skin is not the only parameter on which racism is being based in India with religion being the other prominent aspect.

Racism is not restricted to the colour of the skin.Not allowing to buy a home in a society just because u have a different faith is a part of racism too… #convenient #racism

The cricketers also commented on the plight of the cricketers emerging from South India who are subjected to racial slurs based on their appearance whenever they play in North India.

Such an instance can be related with Tamil Nadu cricketer Abhinav Mukund who after being consistently being targeted due to the colour of the skin put up a statement on social media which was commended and appreciated by current Indian skipper Virat Kohli.

Pathan rightly entailed that the issue is deep-rooted and educating the future generation is the most potent way to get rid of this epidemic that has been plaguing for years and destroying people from the inside.

If colour and regionality are not enough, Indian sports is marred with casteism as well. Recently Yuvraj Singh was caught calling Yuzvendra Chahal with a derogative comment during an Insta live session with Rohit Sharma.  If this is the state where such comments are being called out in the open to the public, one can only imagine what goes on behind the scenes.

We Respect you @YUVSTRONG12 and everyday as a good human as a great cricketer but what you have said is really not acceptable.
It's time for you to walk outside and apologize for this mistake.#युवराज_सिंह_माफी_मांगो pic.twitter.com/TyeSLbAghn

No sport is immune to this in India. Former hockey star V Baskaran, ace shuttler Jwala Gutta and 2006 Women’s boxing champion Sarita Devi have all opened up about their experiences with racism.

The disturbing fact is that most of the athletes being subjected to this kind of abuse have to keep tolerating this for the sake of their careers, which is exactly what happened with Sarita Devi. Hailing from the North-East, she and plenty of others who were from the same region were used to being called “Momo” and “Nepali”, but were powerless at that time.

The level of tolerance is different for each athlete, in the case of former hockey captain V Baskaran, he did not take any offence to the remarks being made on the colour of his skin, but it disturbed him when he faced slurs based on the region where he hailed from and the fact that people overlooked that he was representing his country.

There are thousands of stories like these, with each instance being a warning call for the authorities and the people involved in such activities. The deep-rooted preconceived notions of racism are essentially existing due to the lack of education, it’s not about degrees and doctorates, but the basic education where the first lesson is to see humans as they are and not brand them as objects or label them with a racial slur. With each unnoticed act of racism, the more power the ignorant gets.