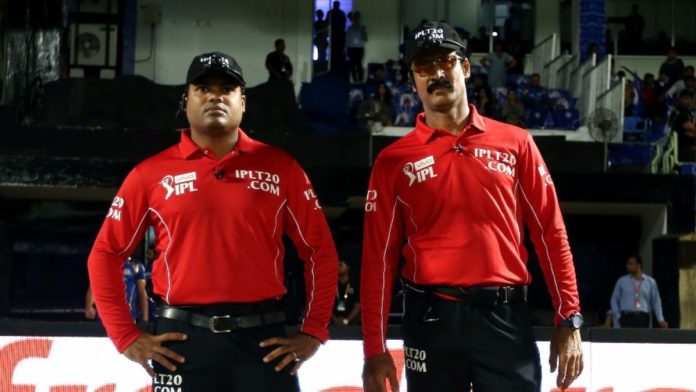 The on-field umpire CK Nandan was hit on the head by a throw from the long-off region. The incident happened in the 95th over of Rest of India’s second innings. Both innings centurion, Hanuma Vihari pushed the ball towards the long-off region to pick up a single while facing Aditya Sarwate.

However, CK Nandan turned his back towards the throw and the ball smashed on to his head. The impact shattered the sunglasses that Nandan had kept on the back of his hat. Consequently, CK Nandan was seen in pain.

Physios rushed to check on him and play was halted for a few minutes. The match referee also came on to the field to check on Nandan and even asked him if he could continue to which the umpire replied in the affirmative. CK Nandan didn’t leave the field and he was able to continue with umpiring.

Batting contributions from Hanuma Vihari, Ajinkya Rahane and Shreyas Iyer were the highlight of what was a fruitful day for Rest of India.

At the end of fourth day’s play between Vidarbha and Rest of India, Vidarbha have reached 37 for 1 at stumps with Sanjay Raghunath on 17 and Atharwa Taide on 16. Vidarbha needs 243 more runs to win, with nine wickets in hand.

Ben Cutting decides to catch the ball with his face, it...