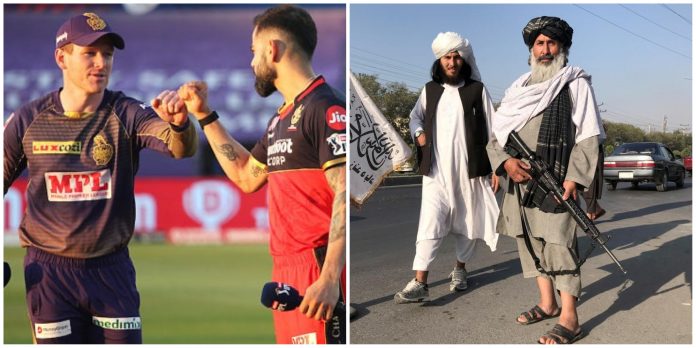 Ever since Taliban took control of Afghanistan, the country has gone through a lot of changes. The status of Afghani players were also up for question.

Recently, the Taliban govt decided to ban the broadcast of the Indian Premier League in the country. The authorities cited anti-islamic content and the presence of female audience in the stadiums.

The IPL series enjoys a huge amount of popularity in the country but it seems that the people of the country will have to make this one sacrifice.

The second leg of the series commenced on Sunday, after it was stopped mid-way due to increasing reports of positive players within the bio bubble. The first match was played between the Chennai Super Kings and Mumbai Indians.

“Afghanistan national (TV) will not broadcast the @IPL as usual as it was reportedly banned to live the matches resumed tonight due to possible anti-islam contents, girls dancing & the attendance of barred (sic) hair women in the (stadium) by Islamic Emirates of the Taliban.”

Journalist, Fawad Aman, has attacked the Taliban govt for such an ridiculous decision.

“Ridiculous: Taliban have banned the broadcasting of Indian Premier League (IPL) in Afghanistan.”

But despite such an action, Mujeeb Ur Rahman and Rashid Khan will continue to participate in the franchise.

This is the second time that the Taliban has taken over the country. The group ruled had a total reign over the country from 1996-2001. During their term, women were banned entirely from participating in any kinds of sports. This has again raised questions about women’s rights and women’s participation in sports.

Under the Taliban’s rule, the country will allow 400 sports, but it is not yet known whether any reservations would be made for women. Although the group has previously stated that the group intends to respect women’s rights but not beyond Islam’s framework.