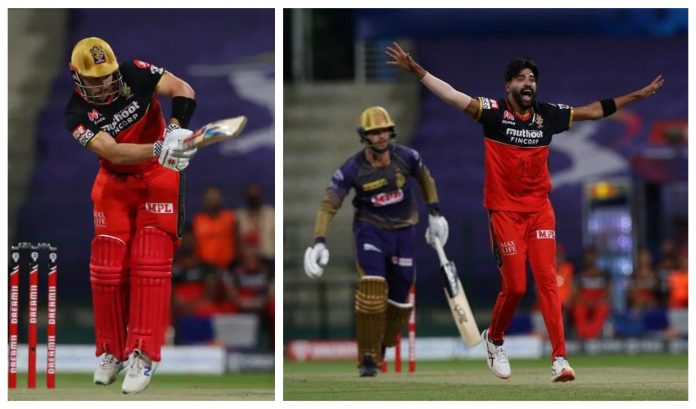 Well into the second half of the tournament, Royal Challengers Bangalore took on the Kolkata Knight Riders to seal an early leeway to avoid a potential late battle for the elusive fourth spot. After a sensational bowling performance spearheaded by Siraj, RCB romped their way to an eight-wicket win over the two-time champions.

Still settling into the captaincy role, Eoin Morgan elected to bat first and revealed that Andre Russell is out due to injury. As a result, Tom Banton got a breakthrough into the side while Prasidh Krishna was roped in for Shivam Mavi for the second change in the playing eleven. RCB dropped left-arm spinner, Shahbaz Ahmed and brought back Mohammad Siraj. 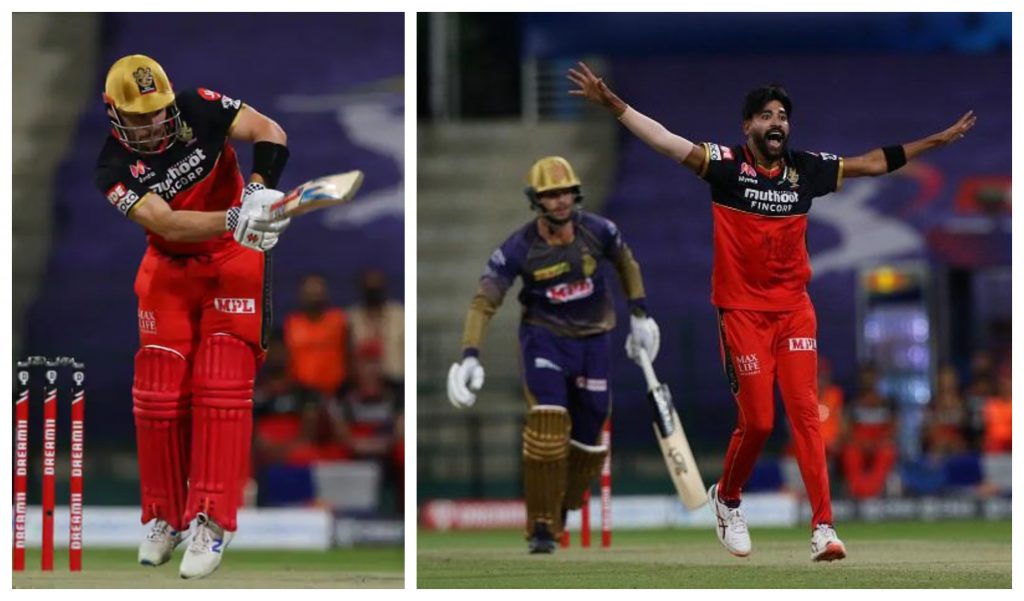 RCB’s solitary change worked wonders with Mohammad Siraj causing carnage in the powerplay. The seamer dismissed Rahul Tripathi and Nitish Rana off successive deliveries to get the team off to a flying start. KKR were reduced to 3-3 in the third over after Shubhman Gill departed for 1.

Siraj became the first bowler to bowl two maidens in an IPL match with a successive over that did not yield a run. The over also resulted in the wicket of Tom Banton, who walked back to the pavilion with just ten runs to his name.

KKR could only score 17-4 in the six-over powerplay and registered one of the lowest scores during the fielding restrictions. The leading wicket-taking spin bowler Yuzvendra Chahal struck instantly to trap former captain Dinesh Karthik right in front who struggled immensely for his 14-ball 4 run inning.

Eoin Morgan played a lone knock of 30 while Kuldeep Yadav and Lockie Ferguson prevented the side from being bowled out. KKR registered the lowest knock by a team who played out the entire 20 overs with just 84-8 on the board. Siraj emerged to be the pick of the bowlers with mind-boggling figures of 4-2-8-3

Devdutt Padikkal and Aaron Finch got the team off to a comfortable start with the former doing the majority of the scoring. While RCB escaped unscathed in the powerplay, they were hit with twin strikers following the dismissals of both the openers in the seventh over.

Virat Kohli and Gurkeerat Singh Mann steered the side to an eight-wicket victory in the 14th over to notch up their seventh win-win in the tournament.