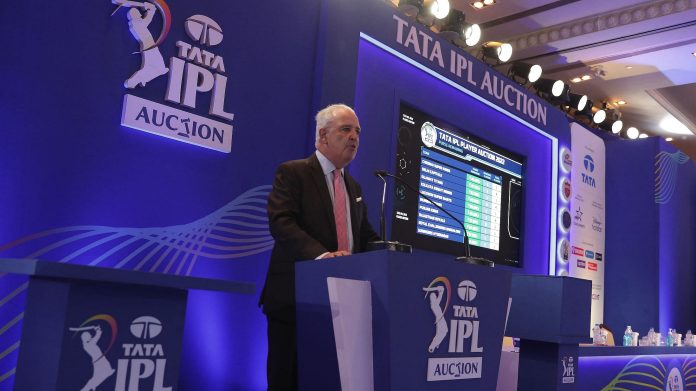 The IPL 2023 auction is set to take place on December 23, Friday, in Kochi and all ten franchises are eyeing to create a powerful squad for the 16th edition of the cash-rich event. After collapsing during the IPL 2022 auction and being taken for medical treatment, Hugh Edmeades will be back to conduct the auction this year. He has now shared a story behind his gavel.

Hugh Edmeades opens up on the matter

Hugh Edmeades usually brings a wooden gavel along with him when conducting auctions. But the British man uses a one-of-a-kind brass gavel for the auctions for the Indian Premier League. Edmeades will once again use the “unique” brass gavel at the IPL mini auction which is scheduled to take place on Friday at the Grand Hyatt Hotel in Kochi.

“They wouldn’t allow me to carry it in my hand luggage at Heathrow, so I had to put it in the check-in baggage. I explained to them that people of India wouldn’t be happy if they don’t see the old gavel, and thankfully, it is with me now,” Edmeades told Sportstar.

“Because it is made of brass, they consider it a tool or hammer. I tried telling the security staff that it was a gavel, but I could not convince them to allow me to keep it in my hand luggage. They insisted it was a hammer and said they would not allow me to carry it as hand luggage,” Edmeades said.

Edmeades was certainly concerned about if the gavel would land securely because of the lengthy journey and layover in Dubai. As soon as he landed in Kochi, he unpacked his luggage to see if the gavel was okay. In 2018, Edmeades succeeded Richard Madley as the IPL auctioneer, a position he has held ever since.

His collapse in February of this year during the mega auctions owing to “postural hypotension” raised concerns about whether the Board would continue with him for the role this time. When he was taken for medical care, the BCCI requested Charu Sharma, who then continued the proceedings.

Edmeades, however, returned to conduct the final phase of the auction and received a huge round of applause from everyone present in the ballroom. Edmeades concluded by stating that he is excited to be back and that he had been doing well.