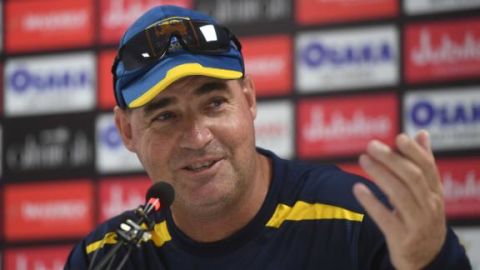 Sri Lanka will play host to a short limited-overs against India from Sunday. The onus will be on the bench squad players of India who are expected to be presented with chances. Sri Lanka coach Mickey Arthur outlined the prowess of the touring Indian outfit, who are without their regular first-team players.

Shikhar Dhawan will lead this particular unit with Bhuvneshwar Kumar being the vice-captain. The squad at present has six uncapped players. The second-string unit will hope to gain valuable experience and potentially make a claim for the upcoming T20 World Cup.

The Sri Lankan cricket authorities were criticized for hosting the young Indian team by former captain Arjuna Ranatunga. However, the board have responded to the criticism by bringing up the Indian team’s credentials.

Apart from the board, the head coach also lauded the ability and the potential of the Indian team. He proceeded to label the team as the IPL All-Star XI. While speaking to Sportstar about the current phase of the Lankan side and more, he said:

“We are very much in a transitional phase at the moment. We are trying out a lot of young players and trying out our best combinations. We are under no illusion because we know this is a wonderful Indian team. The Indian team is amazing, they have got so many good cricketers – it is like an IPL All-Stars XI,” the Sri Lanka head coach was quoted as saying.

The famed coach also admitted that he is a little jealous about the talent Indian coaches have at their disposal.

“They are incredibly talented and I often feel that they are Galacticos. These guys are wonderful players and I am often awed by the talents that are available for the selectors, Ravi Shastri or a Rahul Dravid,” he added

Despite the regular first-team players being a part of the squad to face England, the current Indian team is blessed with a plethora of options on the bench. Several of the talents have already showcased their talent in the IPL and other domestic competitions.

India will face Sri Lanka in the first ODI on Sunday after the series was rescheduled due to a virus outbreak in the Lanka camp.