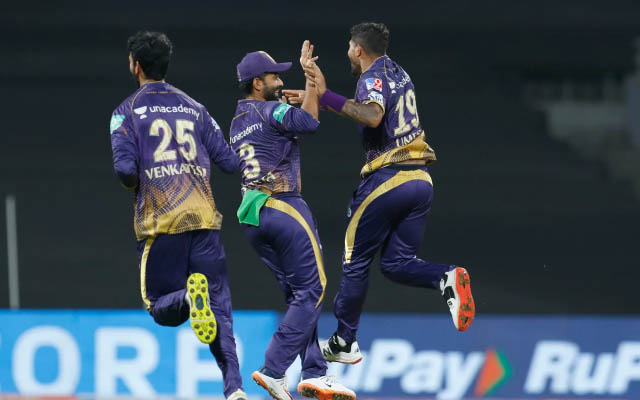 Kolkata Knight Riders (KKR) took on the Punjab Kings (PBKS) in the eighth match of the 2022 Indian Premier League (IPL). The two-time champions returned back to winning ways on the back of Andre Russell and Umesh Yadav’s heroics.

Shreyas Iyer won the toss and elected to bowl first. KKR decided to play an extra bowler and as a result, recalled Shivam Mavi in place of Sheldon Jackson.

Punjab Kings handed Kagiso Rabada his franchise debut and included the pacer for Sandeep Sharma in the playing XI.

Umesh Yadav’s purple patch in the powerplay continued as he trapped Mayank Agarwal in front. Bhanuka Rajapaksa played an astonishing cameo of 31 off 9 deliveries, hitting three consecutive sixes off Shivam Mavi before getting out. The powerplay ended on a sour note for the Punjab Kings as Shikhar Dhawan departed off the penultimate delivery of the sixth over.

The spinners spun a web in the middle overs, restricting the boundaries and creating pressure. Skipper Iyer brought back Umesh Yadav in the ninth over, and the in-form pacer repaid the faith with the wicket of Liam Livingstone.

Wickets continued to tumble for PBKS. Raj Bawa, Shahrukh Khan and Harpreet Brar all fell in quick succession. Umesh Yadav finished his spell at 4-23, finishing with the wicket of Rahul Chahar.

A handy knock by Kagiso Rabada in the end, 25 off 16 deliveries, pushed PBKS to a respectable total of 137, with 10 balls to spare.

Ajinkya Rahane began the innings with a handful of classy shots, but became Kagiso Rabada’s maiden wicket for PBKS. Venkatesh Iyer’s poor form continued as he departed for just 2.

The introduction of spin brought another breakthrough. Shreyas Iyer, once again perished while attacking the leg-spinner. After Iyer’s dismissal, Rahul Chahar struck again to claim Rana’s wicket for a duck to end with a double-wicket maiden and put KKR at a precarious position of 51-4.

Odean Smith conceded 30 runs off the 12th over as he coasted his way to a half-century. The all-rounder finished with 70 off 31 deliveries to help KKR chase the total with 33 deliveries to spare.