Kolkata Knight Riders (KKR) are still alive in the competition after scoring an impressive win over SRH by 54 runs at the MCA stadium in Pune. SRH’s chances of making it to the playoffs look bleak after losing 4 matches in a row. 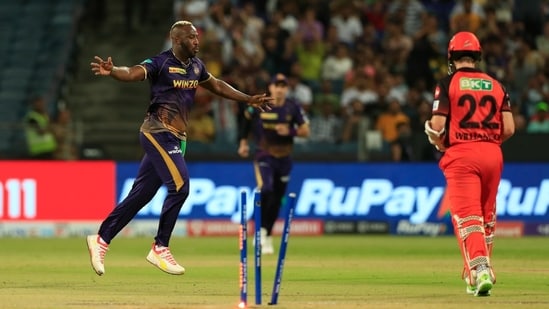 KKR skipper Shreyas Iyer won the toss and made the unpopular decision to bat first looking at the history of the MCA stadium. KKR made 2 changes as Sam Billings and Umesh Yadav came back to the squad in place of Pat Cummins and Sheldon Jackson. On the other hand, SRH brought back Marco Jensen, Washington Sundar, and Natarajan in the XI.

SRH landed the early blow as Marco Jensen removed V Iyer in the second over. But Rahane and Rana stitched a small partnership and were looking solid. But express speedster Umran Malik tore apart the middle order of KKR with three quick wickets.

KKR was reeling at 94 for 5 when Sam Billings and Andre Russell stitched a crucial partnership. The duo notched up 60 runs in quick succession and Russell’s power-hitting at the end powered KKR to 177 in 20 overs.

Chasing teams at the MCA do not have a great record. And the trend continued in this match as well. SRH started slowly in the powerplay as they lost skipper Kane Williamson in the sixth over. From there on, SRH’s innings never took off as they lost wickets at regular intervals.

Young Abhishek Sharma (43 off 28 balls) and Aiden Markram (32 off 25 balls) tried their best to keep SRH’s chances alive but Andre Russell had other plans as he had an excellent day at the field. The West Indian all-rounder took 3 for 22 and pushed SRH to the back foot. Other KKR bowlers also chipped in with at least one wicket, but Russell was the star of the show with his all-round. performance.