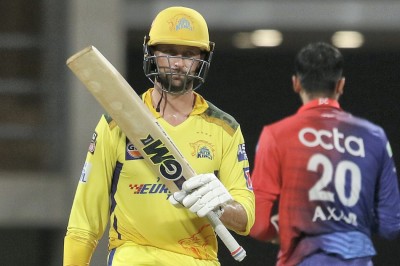 Chennai Super Kings (CSK) got back to winning ways as they dominated DC in a one-sided contest from start to end at the DY Pati Stadium in Navi Mumbai. CSK have improved their NRR massively with a win by 91 runs over DC, which is equivalent to an innings victory in Tests.

Delhi skipper Rishabh Pant won the toss and elected to bowl on a flat wicket. Delhi made two changes as Bharat and Axar replaced Mandeep and Lalit Yadav. On the other hand, CSK brought back Bravo and Dube in place of an injured Jadeja and Pretorious.

CSK was off to an explosive start as their openers Devon Conway and Ruturaj Gaikwad took the DC bowlers to the cleaners. They stitched another 100-run stand in this edition where Conway played the role of the chief destroyer.

Conway brought up his third consecutive half-century and notched up his highest IPL score. Dube and Dhoni provided CSK a strong finish as they posted a mammoth 208 runs on the board.

Even on a good wicket with dew in the field, CSK bowlers made it tough for the DC batters. They lost both their openers in the powerplay itself. Marsh and Pant stitched a small partnership to give DC hope.

But DC suffered a mini-collapse and lost 6 wickets in the span of 27 runs in the middle order. They were ultimately bundled out for 117 as CSK registered a win by a huge margin of 91 runs, which has severely dented DC’s NRR. Moeen Ali was the pick of the bowlers who picked 3 wickets and gave away only 13 runs. CSK has kept its hopes alive with this win.