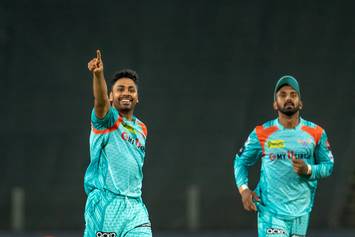 Lucknow SuperGiants (LSG) defeated two-time IPL champs KKR in what can be called a one-sided contest. LSG overpowered KKR by 75 runs at the MCA stadium in Pune.

Shreyas Iyer won the toss and elected to field first on a good batting surface. Both teams made one change as KKR had to replace Umesh Yadav with Harshit Rana as he sustained an injury. On the other hand, Lucknow brought back Avesh Khan in place of Gowtham.

LSG got an early blow as Rahul fell for a diamond duck due to De Kock’s mistake. However, the South African compensated for his mistake after he scored a blistering fifty. Deepak Hooda and De Kock stitched a valuable 70-run stand.

However, Narine’s economical spell put brakes on LSG’s scoring rate. But Lucknow finished strong with the help of lusty blows from Marcus Stoinis and Jason Holder who scored 30 runs from Mavi’s 19th over. LSG posted 176 runs on the board which was a competitive total.

Chasing the total, KKR’s top order failed miserably again. LSG pacers exploited the pace and bounce off the surface. KKR lost their first four wickets for just 25 runs. However, Andre Russell showed some fight in the game as he smashed 45 off just 19 balls. But he was the lone warrior for the knights in the game.

Lucknow pacers Avesh and Holder picked up three wickets each as KKR were bowled out for  101 inside 15 overs. KKR’s hopes of qualifying for the playoffs look bleak. On the other hand, Lucknow has jumped to the top of the table with this victory.