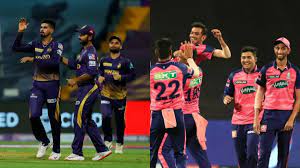 The last time KKR and RR went head to head in the competition, they played the most entertaining game of the season which had a hundred, a fifer, a hattrick, and a close finish. Now, the two will renew their rivalry at the Wankhede Stadium in Mumbai. Rajasthan Royals have played impressive cricket this season in which Buttler and Yuzi Chahal have made a big contribution. Rajasthan currently dominates most of the leading charts of the season and is well on its way to the top four.

But the pink army needs its other players to step up and contribute to the win. They can’t be dependent on just one or two batters to score runs. Even if Buttler or Hetmyer fails to score, other RR batters have to bail their team out of trouble. The form of Trent Boult off late has also been a point of concern for RR.

After an impressive start to the season, nothing seems to be going right for the Knights. They have lost 5 consecutive games since Pat Cummins hit the fastest fifty. KKR has never been able to find out their perfect XI as they have constantly made changes to their side.

KKR is also resting their premier all-rounder Pat Cummins who has had an ordinary tournament with the ball. Their mystery spinner Varun Chakravarthy seems to have lost his element of surprise and he was ultimately dropped from the side. Their batting has consistently failed to give their team a respectable total. Hence, currently, nothing is going right for the Iyer-led side.

KKR have lost the plot and still hasn’t figured out their best XI. On the other hand, RR has been a consistent side this year. Hence, they would fancy their chances of beating a dismantled KKR unit.