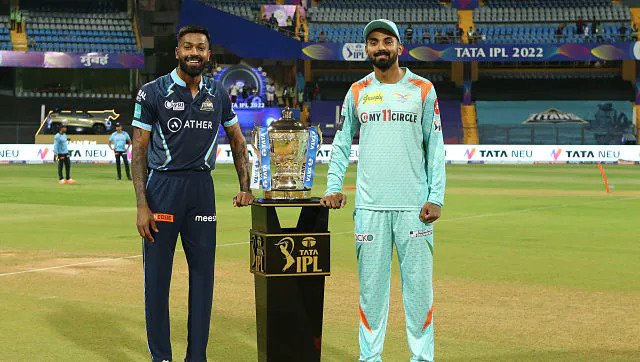 The fourth match of the IPL 2022 season featured both new teams at the Wankhede Stadium. Gujarat Titans (GT) secured their first points after defeating Lucknow Super Giants (LSG) in a last-over thriller. Mohammad Shami was adjudged player of the match for his spell of 3-25.

Gujarat Titans won the crucial toss and elected to bowl first. Matthew Wade, Lockie Ferguson, David Miller, and Rashid Khan were the overseas players for the side. With all-rounders Jason Holder and Marcus Stoinis being unavailable for the contest, LSG played three overseas players. Quinton de Kock, Dushmanta Chameera, and Evin Lewis featured for the KL Rahul-led side.

Mohammad Shami set things rolling for Gujarat Titans with the ball right from the word go. He got the prized wicket of KL Rahul off the very first delivery. The right-arm pacer also dismissed Quinton de Kock and Manish Pandey in his three-over spell in the powerplay.

A stellar catch by Shubman Gill at deep square leg ended Evin Lewis’ stay at the crease. Tottering at 29-4, the rebuild job was down to 22-year-old Ayush Badoni and Deepak Hooda.

The pair put on a commanding 87-run stand for the fifth wicket, playing the entirety of the middle overs. Titans’ skipper Hardik Pandya bowled his full quota of four overs while Rahul Tewatia and Sai Kishore did not get a chance to bowl.

Rashid Khan notched the wicket of Deepak Hooda off the final delivery of the spell. The all-rounder scored 55 off 41 deliveries while Badoni also registered his maiden fifty in the format.

Krunal Pandya chipped with a small cameo at the end to push LSG to 158-6 after their 20 overs.

Chasing just under 8 runs an over, Gujarat Titans were off to a shaky start. Shubman Gill departed for a duck, trying to go over the infield, but only getting the toe end of the bat. Dushmanta Chameera struck once again, nailing the perfect yorker to get the better of Vijay Shankar.

Coming into bat at No.4, skipper Hardik Pandya played positively to send the Titans to 44-2 at the end of the powerplay. However, Krunal Pandya got the upper hand in the contest between the brothers. The left-arm spinner got the wicket of his brother after the latter spliced the ball to long-off.

Pandya along with Deepak Hooda put a hold on the run flow with the latter even dismissing Matthew Wade. 22 runs in the 16th over, restored parity into the run chase. The left-handed duo of David Miller and Rahul Tewatia continued to attack the spinners.

Gujarat Titans got home with two balls to spare and registered their maiden IPL win.