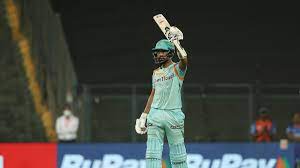 Mumbai Indians (MI) will have to wait longer for their first win of the season as they were overpowered by KL Rahul and the exceptional bowling by LSG which handed them a 36-run defeat. MI was playing their first game at the Wankhede after three years but their homecoming was ruined by their 8th consecutive defeat. 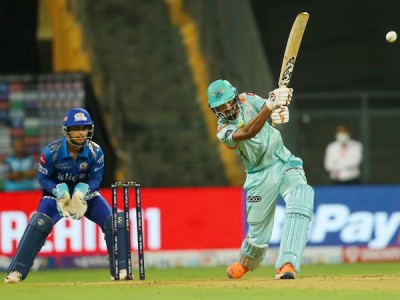 Mumbai skipper Rohit Sharma won the toss and bowled first despite the fact that the previous three games were won by sides batting first. Lucknow made one change and brought in Mohsin Khan as Avesh suffered a niggle. On the other hand, Mumbai named an unchanged XI.

Lucknow did not have the quickest starts as they managed just 30 runs in the powerplay. However, LSG skipper KL Rahul played an exceptional knock as the leader brought up his second hundred of the tournament. He scored an unbeaten 103 out of his side 168 runs. The second-best score for Lucknow was 22, which shows how dominating was Rahul’s innings.

MI openers gave their team a conservative start. But the run chase soon became tricky as LSG bowlers picked up wickets at regular intervals. Rohit and Tilak Verma tried their best to keep MI in the hunt with their scores in the 30s but other batters failed to give them support.

Ishan Kishan’s 20 balls 8 and Pollard’s 20 balls 19 summed up MI’s outing with the bat. LSG bowlers nailed their yorkers at the death as they dried up runs and did not let the game slip away. Chameera and Krunal Pandya’s economical bowling powered LSG to a 36-run win as MI is still in the hunt for their maiden win this season.