Before you enter the world of Online Casinos, Check out the top 10 Live casinos recommended by India Casino Info
Home Cricket IPL 2022 Match 37: MI vs LSG Odds, Predictions, and Analysis Mumbai Indians (MI) will face off against a strong Lucknow Super Giants (LSG) and will look to secure their first victory of the season. MI is set to play their first game at the Wankhede stadium and will hope that a change in venue brings in luck for them. 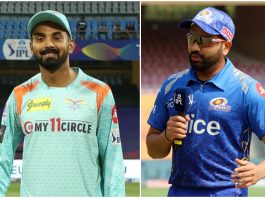 There are plenty of things that are not going in favor of the most successful team in the IPL and that can be drawn back to their auction strategy. Their bowling lacks a leading spinner who has the ability to turn the match by himself. Also, Jasprit Bumrah looks like a lone warrior in the MI bowling attack.

In the previous game, MI’s bowling gave a tough fight, despite being the team’s weakness. But they are suffering big time from the lack of form of Rohit Sharma, who is due some big runs this season. MI is heavily dependent on Surya Kumar Yadav which is not a good sign as this can put pressure on SKY to constantly perform.

MI has tried numerous combinations in their bowling lineup so it would be interesting to see if they would go ahead with the same combination that played against CSK as they did considerably well. Moreover, MI would want to give their mentor, Sachin Tendulkar, a memorable birthday present by winning their first game of the season.

Lucknow has the most well-balanced side in the IPL as they picked plenty of all-rounders in the auction. This means they have depth in their bowling and batting. However, the KL Rahul-led side hasn’t been playing at their potential as they have managed to lose games from a winning position.

The lack of form of Pandey is a concern for LSG as number 3 is a crucial batting position in T20 cricket. De Kock hasn’t consistently fired which puts pressure on the middle order. KL Rahul has an excellent record against MI and would look to replicate the hundred that he scored a week ago.

Their premier spinner Ravi Bishnoi hasn’t been able to pick up the number of wickets Lucknow would have liked. His inability to take wickets this season has been a concern for the new franchise. Lucknow would also want to work on their death bowling as opposition teams have been able to extract crucial runs at the end.

LSG has a better-balanced side than Mumbai. They have the bowling resources and the batting to counter MI which they have shown in their previous encounter on 16th April. However, as it’s Sachin’s birthday, MI would look to gift the little master a memorable present and finally win their first game.