Gujarat Titans (GT) continued their impressive show in the ongoing IPL as they managed to defend a below-par score of 156 despite Andre Russell’s impressive all-around show. Kolkata has now suffered their fourth consecutive defeat. 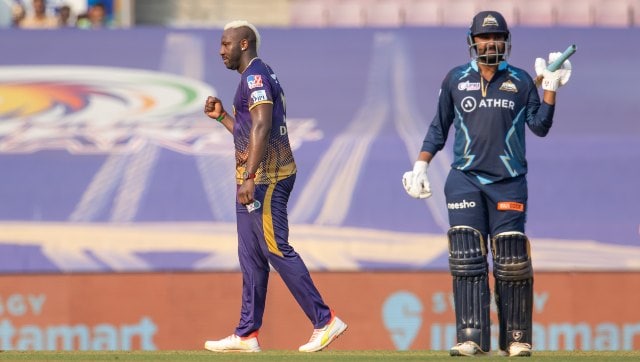 Gujarat Titans’ skipper Hardik Pandya made came back to the squad and won the toss. He became the first skipper to elect to bat after winning the toss due to hot weather conditions.  KKR stepped onto the field with three changes as the players from the camp suffered from niggles.

Gujarat did not have the best of starts as they lost Gill in the second over. Captain Hardik promoted himself to number 3 and made an instant impact. He scored his fourth fifty of the season.

However, Gujarat failed to capitalize on the platform set by Hardik Pandya as KKR bowlers brought their side back in the game after picking wickets at regular intervals post the 16th over. Andre Russell, who bowled the 20th over, picked up 4 wickets in the over, restricting Gujarat to a 156.

KKR had a horrible start to the chase as they lost 4 wickets in the powerplay. GT pacers made full use of the new ball and the favorable conditions as KKR were pushed into the back foot early in the chase.

However, Russell with his power-hitting brought his side back into the contest. He hit 48 off 25 balls which included 6 sixes. But the West Indian failed to score 18 off Joseph’s final over which resulted in an 8-run win for Gujarat Titans. Rashid Khan was awarded the Player of the Match for his game-changing wickets in the middle overs.