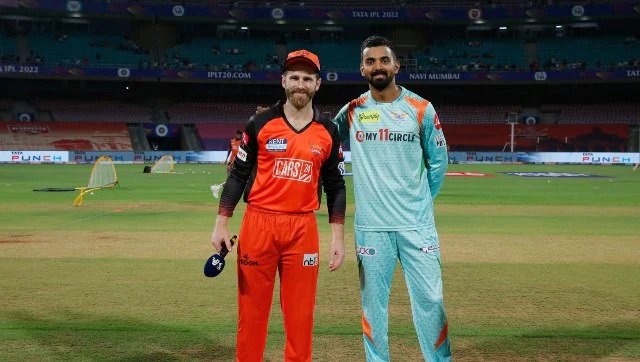 The twelfth match of the Indian Premier League (IPL) 2022 witnessed Sunrisers Hyderabad (SRH) take on the Lucknow Super Giants (LSG). LSG defended a 170-run target to notch their second win in succession. KL Rahul and Avesh Khan were the top performers for the side.

Kane Williamson won the toss and opted to bowl first. SRH named an unchanged side for the encounter. Jason Holder made his way into the LSG playing XI straightaway, replacing Dushmanta Chameera in the process.

The Orange Army were off to a much better start this time around. The ploy to introduce Washington Sundar in the powerplay worked wonders for the team. The off-spinner got two left-handers – Quinton de Kock and Evin Lewis in his first spell.

Manish Pandey’s poor start had another entry with a 10-ball 11 run knock. Tottering at 27-3, the task of getting the innings back on track was cast upon skipper KL Rahul and Deepak Hooda.

The pair shared a crucial 87-run partnership for the fourth innings. Both players registered their fifties before Bhuvneshwar Kumar and T Natarajan shone in the death overs they conceded only seven and eight runs off their respective final overs.

The opening combination of Abhishek Sharma and Kane Williamson failed to fire for the second game running. Avesh Khan dismissed both the batters inside the powerplay.

Krunal Pandya struck twice in the middle overs to put a dent in the SRH run chase. The left-arm spinner removed Aiden Markram and Rahul Tripathi, the latter departed after making a well-compiled 44.

Washington Sundar, promoted up the order this time around, keeping up with the asking rate with Nicholas Pooran at the other end.

Avesh Khan turned the game on its head in the 18th over. He took the wickets of Nicholas Pooran and Abdul Samad off successive deliveries.

A composed final over from Jason Holder, meant that LSG secured their second successive win. The KL Rahul-led side emerged victorious by a margin of 12 runs.