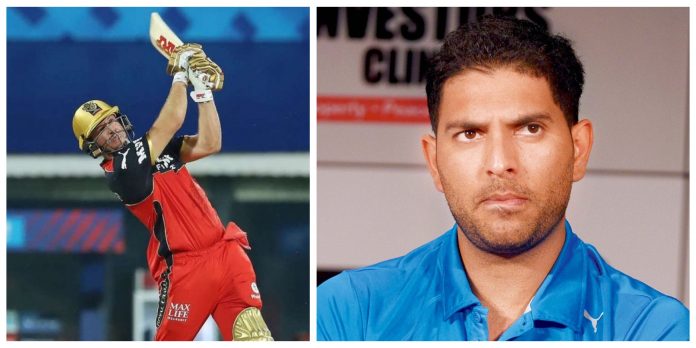 AB de Villiers has played countless match-defining knocks and he was once again in the spotlight after RCB’s chase derailed in the late middle overs. With only the lower middle order to keep him company, the South African compiled a masterclass in finishing.

The veteran player, however, batted at Number 5 in the run chase, a move which took everyone by surprise including former India all-rounder Yuvraj Singh. Rajat Patidar and Glenn Maxwell took up the spots above de Villiers in the RCB batting line-up.

During the match, Yuvraj shared his frustration after seeing de Villiers drop down the order. “Don’t understand @ABdeVilliers17 batting at no 5 !!? our best batsmen after opening have to come at no 3 or no 4 in t20 just an opinion.” he tweeted.

While it all worked out well in the end with Glen Maxwell playing a handy inning and the ever reliant de Villiers closing out the game, Virat Kohli explained the reason behind promoting Maxwell ahead of Mr. 360.

“The opposition gets nervous about AB. We have depth in the batting which we want to utilise,” Kohli said in the post-match presentation

The RCB skipper also added that de Villiers instils fear into the opposition and is a valuable asset to have during the death overs, especially in sluggish slow tracks.

“AB is probably the only player who’s so versatile and can do what he did on slow pitches today, so we have to understand. If there’s a partnership on, you might see a totally different order. But in a tricky chase, you want some options in the back end, where the opposition thinks it’s not over till he gets out,” Kohli added.

The demotion of de Villiers was not the only surprise that was introduced by RCB during the chase. In the absence of Devdutt Padikkal, the opening slot went to Washington Sundar.

The collapse in the middle overs is an area RCB have to look at with their batting after the big four primarily comprising only of Washington Sundar and Daniel Christian.

After scraping through to get the much-needed points against the defending champions, RCB will next take on SRH on Wednesday.