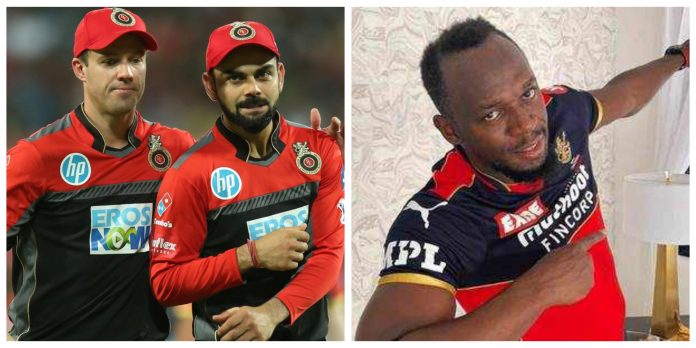 Record holder and Olympic medalist Usain Bolt shed his support for the Royal Challengers Bangalore by wearing their new jersey. The franchise recently announced a long-term partnership with Puma, for which both Virat Kohli and Usain Bolt are global ambassadors.

Posting the image on social media, Bolt reminded the RCB contingent that he is still the fastest one around despite the addition of RCB in the Puma umbrella.

The Indian skipper, in response, acknowledged the speedster’s words and welcomed him to the Royal family.

AB de Villiers, who was also tagged in the post by Bolt, also responded to the tweet by claiming that he now knows who to bank when the side needs an extra few runs.

“We know whom to call when we need a few extra runs! @usainbolt.

The Jamaican sprinter has been a longtime admirer of cricket and has admitted the sport to be his first love. While he dreamt of a career in cricket, he switched upon to athletics at his father’s insistence.

“My father is a huge cricket fan, but when I got to higher secondary, I had two options — cricket or athletics. My dad said because of the system in Jamaica; it would be better to take up athletics. You just have to run fast in athletics while it’s tougher to get into the national (cricket) team’,” Bolt had said in 2014.

Running between the wickets has always been an integral part of the iconic Kohli-deVilliers duo which has often gone lost amid the raining boundaries. The duo had challenged each other for a race following a cheeky Twitter banter a few weeks back,

Virat Kohli and co. recently completed their photoshoot with the new jersey and have been going hard at training with the inclusion of their latest auction purchases such as Kyle Jamieson and Glenn Maxwell.