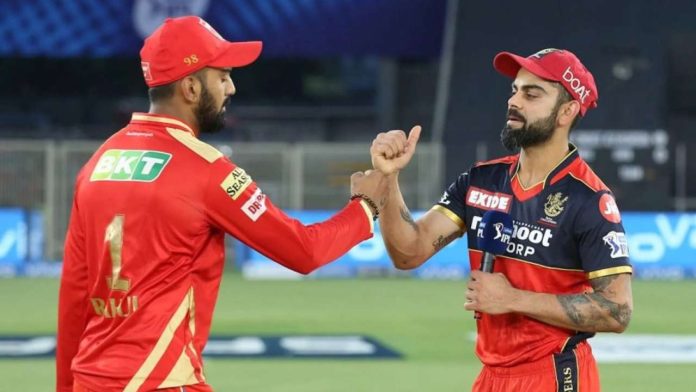 In the first match of a Sunday doubleheader, Royal Challengers Bangalore(RCB) are set to take on the Punjab Kings(PBKS) in the 48th match of Indian Premier League 2021 on Sunday, October 3, at the Sharjah Cricket Stadium.

RCB recently won against RR in their last outing. They are currently in the top four with seven wins from eleven games.

Virat Kohli-led RCB cruised past RR with great bowling performance. The bowlers were smashed earlier by Evin Lewis and Yashasvi Jaiswal. But Yuzvendra Chahal, Shahbaz Ahmed and Harshal Patel combined to change the complexion of the match as they restricted RR to 149/9. Srikar Bharat and Glenn Maxwell joined forces to bag the game for RCB with ease.

On the other hand, PBKS got a win against KKR in their last match. PBKS are required to win their last two matches to stay in contention for the playoffs.

PBKS looked comfortable with chasing the target set by KKR. They managed to restrict KKR to 165/7. The deadly trio of Ravi Bishnoi, Arshdeep Singh, and Mohammed Shami conceded a combined 77 runs in twelve overs but picked up six wickets.

Mayank Agarwal was solid with the bat as he contributed a blistering 27-ball 40 to get PBKS off to a good start. While KL Rahul batted through the innings, Nicholas Pooran and Aiden Markram got out after a brief inning.

Shahrukh Khan stepped up with a crucial 22 runs off 9 balls and helped PBKS take the game home with three balls to spare.

RCB are the favourites and are priced at 1.72 meaning if you bet ₹100 on them and if they win the match, you’ll be making ₹172.

PBKS are priced at 2.05 and are the underdogs. Betting ₹100 on them will earn you ₹205 if they come out as winners.

RCB have gained momentum which they will not be willing to lose. But they haven’t played Sharjah unlike PBKS, who should have a better understanding of the conditions. The way PBKS has played in their recent matches they could change the landscape quickly and might come out on top of RCB.

PBKS will win the match.