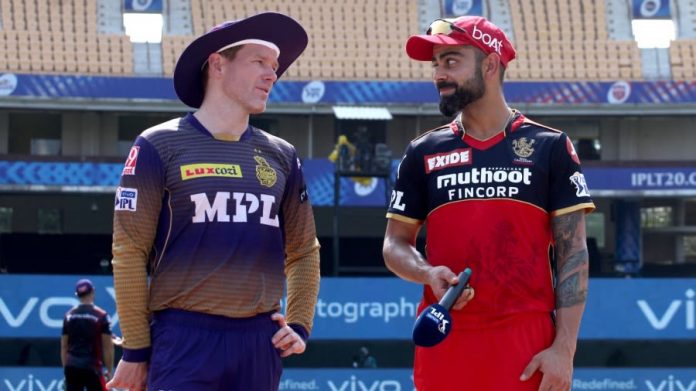 The Royal Challengers Bangalore (RCB) take on the Kolkata Knight Riders (KKR) in the Eliminator of IPL 2021 on Monday, October 11th, at the Sharjah Cricket Stadium in Sharjah.

RCB had finished the campaign in the third position on the points table with nine wins from fourteen games. They relinquished second place to CSK due to a lower NRR. They come into this game on the back of a thrilling last-ball victory over DC by seven wickets.

RCB had restricted DC to 164/5. They struggled early in their run chase, losing both their openers in the first three overs. AB De Villiers’ lean run continued as he fell after a run a ball 26. However, Glenn Maxwell and Srikar Bharat amassed an unbeaten 111-run partnership to take them home.

While Maxwell made the most of three dropped chances, Bharat stole the show for RCB. His 52-ball 78, including a six off the last ball, helped RCB equal CSK on points but were below them due to lower NRR.

KKR managed to qualify comfortably for the playoffs. Finishing level on points with MI, KKR’s higher NRR helped them make the top four. They batter first on a slow Sharjah track, and tallied an above-par total of 171/4. KKR batters batted patiently and accelerated at the right moments.

Their bowling was also accurate and they dominated the batters. Eventually KKR bundled the Royals out for 85 and took the game home winning by 86 runs.

KKR are priced at 1.95 and are the underdogs. Betting ₹100 on them will earn you ₹195 if they come out as winners.

Both teams won their last outings in Sharjah and KKR have a slight advantage getting the dominating win at the venue against RR. However, RCB will be full of confidence after the last-ball win against DC, and their middle-order looks stronger.

KKR played well in the UAE leg but RCB has had the better overall season, and that consistency could come into play. But given the confidence of KKR, they could come up with a victory over RCB.