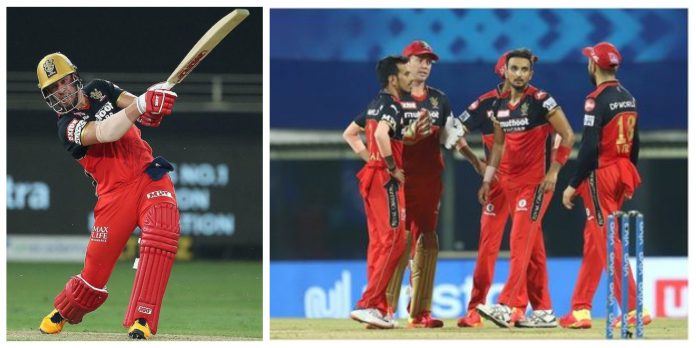 A settled unit resembling a well-oiled machine sums up the defending champions while their opponents find themselves hitting the reset button out of panic time and time again. The contrast in the two sides blended together in a venue miles from their respective hunting grounds.

Virat Kohli won the toss after a lean patch in national colours and elected to bowl first in the out-of-ordinary Chepauk wicket. The three-time finalists handed debuts to Kyle Jamieson, Glenn Maxwell and Rajat Patidar. Devdutt Padikkal, despite recovering from the virus, was not included in the playing eleven under medical advice.

Mumbai Indians, on the other hand, had two changes from their usual set eleven. Chris Lynn replaced Quinton de Kock, who is still serving his quarantine period. Marco Jansen was the other debutant for the defending champions.

Rohit Sharma’s (19)  run out following a mix up with Lynn cast a sluggish start for the team against the new ball opening pair primarily bowled by Mohammad Siraj and Kyle Jamieson.

However, much like the previous two seasons, the fall of a wicket did not affect the side as they went on with their proceedings. Lynn (49)  and Suryakumar (31) shared a 70-run stand in 7 overs.

Jamieson (1-27) managed to extract extra bounce off the surface to dismiss Suryakumar Yadav (31). The batting side lost another wicket soon with Lynn mistiming one off Sundar on 49.  While the narrative implied a burst by MI to end with a mammoth total, RCB clawed their way back into the contest by keeping the imperious middle-order quiet. The quick wickets of Hardik Pandya (13), Ishan Kishan (28), Krunal Pandya (7) and Kieron Pollard (7) by Harhsal Patel (5-27) kept the total down to 159-9. Patel became the first bowler to register a fifer against Mumbai Indians as they could only muster 24-5 in the death overs.

RCB dropped in a surprise by pushing Washington Sundar (10) to the top of the order alongside the skipper. MI nearly had a wicket in the very first over, but a dropped catch by Sharma in the slips prevented that. The all-rounder, despite his opening experience in the domestic circuit, struggled massively in the big leagues and departed in the fifth over after a sixteen ball stay. Trent Boult’s (1-36) knack of picking up wickets in the powerplay continued with the wicket of debutant Rajat Patidar (8).

The middle over crisis for RCB was well documented and Glenn Maxwell (39) was promoted to spruce up things in that phase. Going the entire previous edition without hitting a single six, the maverick player opened his account with a 100 metre six.

Kohli (33) and Maxwell brought some life back into the chase by sharing a tidy 52-run partnership for the fourth wicket. The stand was ended by Jasprit Bumrah(2-26), who removed his national skipper for the fourth time in IPL. Kohli was trapped right in front after he proceeded to shuffle across the stump for a good length delivery.

The chase took a wild detour following the wickets of Kohli, Maxwell and Shahbaz(1) which prompted AB de Villiers(48) to take charge. The South African, like always, stepped up to the task to finish the game off for RCB in the final over despite his dismissal with two balls left.