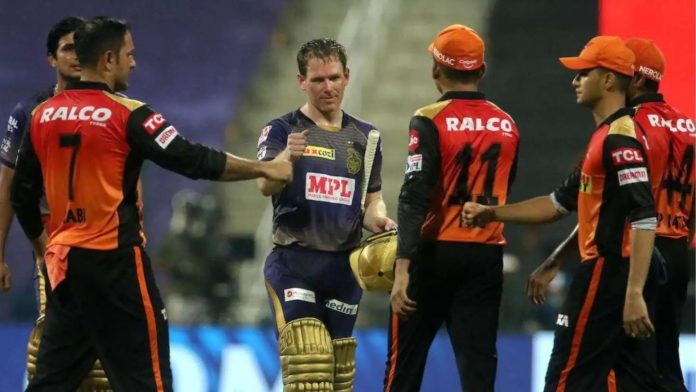 In the second match of a Sunday doubleheader, Kolkata Knight Riders (KKR) will lock horns with SunRisers Hyderabad (SRH) in the 49th match of the Indian Premier League (IPL) 2021 on Sunday at the Dubai International Cricket Stadium in Dubai.

KKR are coming off a five-wicket loss to PBKS, and have won only five times in 12 games. KKR had struggled with fielding and that had cost them their game against PBKS. The team selection also raised some eyebrows as they picked only four bowlers, opting for Tim Seifert over Shakib Al Hasan, but batted the former at no. 7. Defending a target of 166, captain Eoin Morgan dropped Mayank Agarwal on 0. The PBKS opener went on to score 40. runs.

The match also saw a controversial third-umpire call. Rahul Tripathi took a stunning catch to dismiss KL Rahul in the penultimate over as the third umpire to overrule the decision. Tripathi then parried Shahrukh Khan’s catch over the ropes, with four runs required off four balls as they bagged the win.

SRH on the other hand have been knocked out of the tournament. They managed to win only two of their eleven games. They are heading into the game with a six-wicket defeat against CSK.

SRH couldn’t get going against a disciplined CSK bowling attack as they scored only 134/7 in the 20 overs. Jason Holder stepped up with an excellent spell to give them a chance to restrain their opponents but Ambati Rayudu and MS Dhoni finished things off to get the victory for CSK.

KKR are the favourites and are priced at 1.57 meaning if you bet ₹100 on them and if they win the match, you’ll be making ₹157.

SRH are priced at 2.20 and are the underdogs. Betting ₹100 on them will earn you ₹220 if they come out as winners.

SRH will give their all as they have nothing to lose in the tournament. But, KKR is expected to fight back and get the win to remain in contention for the playoffs, and deliver a valiant performance.