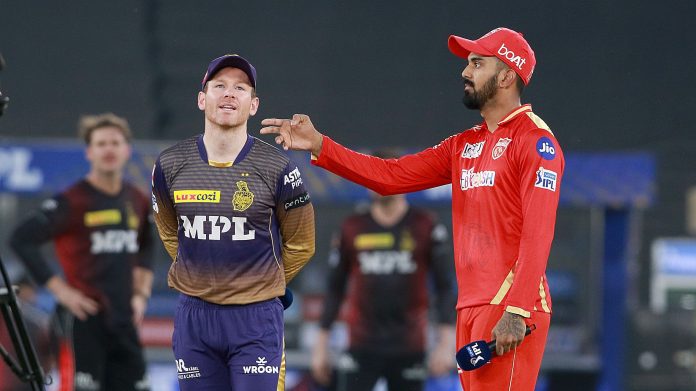 The Kolkata Knight Riders (KKR) are set to collide with Punjab Kings (PBKS) in the 45th match of the Vivo Indian Premier League (IPL) 2021 on Friday at the Dubai International Cricket Stadium in Dubai.

In their previous clash, KKR was triumphant against DC with ten balls still left to spare. Eoin Morgan’s side is in the fourth position on the points table equal with MI, with five wins from eleven matches.

Absence of Andre Russell was a major blow for KKR but they were able to beat DC on a slow pitch in Sharjah. They had opted to bowl first after winning the toss and restricted DC to 127-9.

Sunil Narine once again performed brilliantly with the ball, and also contributed some quick runs with the bat. Venkatesh Iyer also picked up a couple of wickets. It was the contribution of Nitish Rana and Sunil Narine that helped KKR bag the game.

PBKS suffered a loss by six wickets against MI in their last match They are placed sixth, with four wins from eleven games. PBKS batters collapsed against MI. Mayank Agarwal missed the match as KL Rahul and Mandeep Singh opened the batting.

The batting line-up slumped after the powerplay, with Chris Gayle and Rahul falling to the bowling attack of Kieron Pollard. While Aiden Markram and Deepak Hooda helped restore the PBKS innings, the team couldn’t garner many runs and tallied a low total of 135-6.

They performed well with the ball as Ravi Bishnoi excelled. But the side made some fielding blunders, dropping catches which cost them the match. Pandya and Pollard finished the game following the great knock by Saurabh Tiwary.

KKR are the favourites and are priced at 1.72 meaning if you bet ₹100 on them and if they win the match, you’ll be making ₹172.

PBKS are priced at 2.10 and are the underdogs. Betting ₹100 on them will earn you ₹210 if they come out as winners.

PBKS can certainly pull off an upset for KKR but the former champions would be eyeing to carry on with the momentum. KKR are likely to come out on top as they would cement their position in the playoffs.