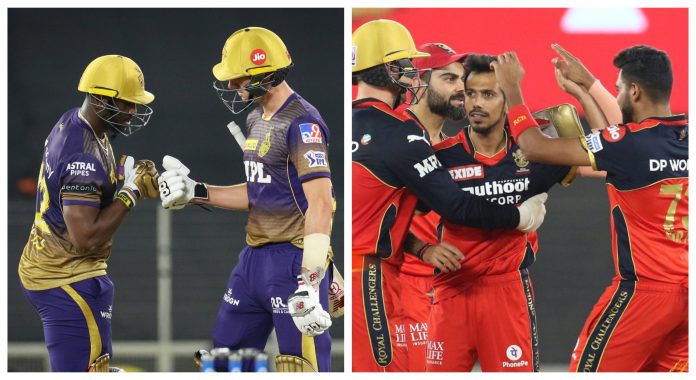 The IPL 2021 season, the 14th edition of the cash-rich cricket league has its 30th match on 3rd May when Kolkata Knight Riders will face Royal Challengers Bangalore at the Narendra Modi Stadium in Ahmedabad.

Down in 7th in the league table, KKR have managed only two wins so far and was lacklustre against DC last Thursday. The efforts from Shubman Gill (43-off-38) and Andre Russell (unbeaten 45-off-27) paddled their total to 154, but the bowlers did not stand a chance against the Delhi batting order.

Except for Pat Cummin’s 3-wicket haul with a 6.00 economy rate, the rest of KKR bowling lineup gave up costly figures as DC reached the target by the 16th over courtest of Shaw and Dhawan’s batting prowess.

Starting their IPL 2021 campaign with a stunning 4-win streak, RCB somehow lost their rhythm, losing to CSK and PBKS as well as edging past DC by just a single run. Although Punjab made good use of the costly bowling from Bangalore, the target of 180 did not look out of reach for Virat Kohli and co.

Unfortunately, the chase did not reflect what was expected as RCB batsmen failed to get a hold on the pitch, with only Kohli, Patidar and Harshal Patel at the end managing to touch the 30-run mark as they exhausted the 20-overs at just 145 runs.

RCB are priced at 1.72 and are the favourites. Betting ₹100 on them will earn you ₹172 if they come out as winners.

While both teams are coming off of a loss each, RCB has already beaten KKR this season back on 18th April and will be looking out to replicate the same against Eoin Morgan and the company, who are still unable to find their cadence this year.

Both of Bangalore’s last two defeats have come as chasing failures so putting up a massive score in the first innings on the score-friendly Ahmedabad pitch will give Kohli’s side the upper hand, but they will still have the odds in their favour even if KKR bats first.