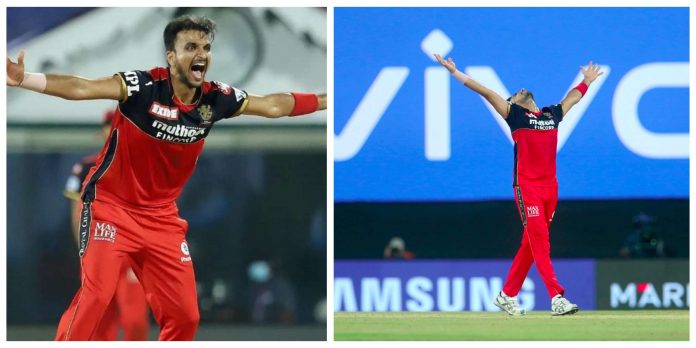 Harshal Patel secured three wickets in the final over to register the first-five wicket haul against Mumbai Indians in the tournament’s history. The pacer’s impeccable fifer helped RCB to restrict MI to 159-9 in their 20 overs.

Going for 15 runs in his first over after being introduced into the attack after the powerplay, Patel returned back into the attack strongly in the death overs. He opened his account with the wicket of Hardik Pandya with a loose full toss.

After Kishan’s catch was spilled in the deep by Siraj, Patel bowled a scorching yorker the very next delivery.  While initially adjudged not out, the decision was overturned after the side opted for a review.

The final over saw the dismissal of three wickets in the form of Krunal Pandya, Kieron Pollard and Marco Jansen. Patel started the over on a bright note by removing Pandya and Pollard in the first two deliveries. He missed out on a hattrick narrowly but made it count in the fourth delivery with a perfect yorker to bring up his fifer.

The bowler spoke about his feat following the culmination of the first innings.  “It was very clear from the beginning I was going to bowl two overs at the death but today I bowled three. Feels great. This is my first five-wicket haul in all the T20s I’ve played. Coming against MI it feels special,” he stated