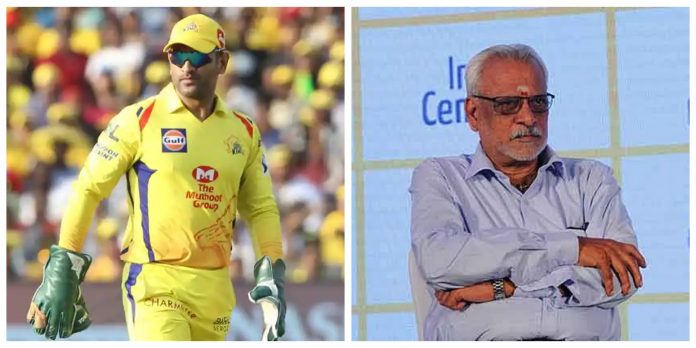 MS Dhoni will once again lead the Yellow Army this season after already having affirmed his status in the previous edition itself. The skipper’s future with the franchise is still on the edge with the mega auction on the horizon as well as the age factor.

Chennai Super Kings’ CEO Kasi Vishwanathan shared his stance on Dhoni’s future during an interview with the Indian Express. He firmly believes that the upcoming season of the IPL won’t be the player’s last. He added that that the franchise are currently not looking for any replacements at the moment.

See, I don’t think it is going to be his final year. This is my personal view and I don’t think we are looking at anybody now.” he said

Ever since roping in the player in the inaugural auction, the partnership between Chennai and MS Dhoni has been monumental and iconic. Barring the franchise’s 2-year hiatus, MS Dhoni has led the franchise to great heights which include 3 IPL titles, and a guaranteed playoff spot in 10 editions out of 11.

The trio of MS Dhoni, Suresh Raina and Ravindra Jadeja has arguably constituted the core of the CSK group, and the CEO shed some details on the latter two players. Suresh Raina missed the previous edition of the tournament altogether while Jadeja is coming off a dislocated thumb he suffered in Australia.

“See, Jadeja has been cleared by the NCA. He has joined our team for practice. He is looking good. He is working hard. And we are hoping that he will be fully fit by the time the IPL starts.

“He (Raina) played the Syed Mushtaq Ali Trophy. After that, he has been practicing. He didn’t want to play a 50-over tournament (Vijay Hazare Trophy). (But) he has been practicing with us also for the last 10 days. He is very keen to do well. See, a player of his calibre who has done so much for CSK as well as the highest run-getter in the IPL for a period of the last 10-12 years (before Virat Kohli overtook him), he is very keen to prove himself.”

One of the surprising acquisitions of the auction was CSK’s move for Cheteshwar Pujara. The CEO outlined that Pujara will be an asset for the side and won’t have difficulties adapting to the pace of the shortest format.

“We also wanted to honour him, that’s for sure. But at the same time, I can tell you one thing, a person of his calibre with such good technique, he can adapt to any format. That is our view. He can be a player who can contribute a lot to CSK,” he said

Inclusions such as Moeen Ali and Krishnappa Gowtham will be vital for the team that let go of some of their senior players prior to the auction. The franchise revamped its spin department following the departures of Harbhajan Singh and Piyush Chawla.

The franchise will open their season against the previous season’s runner-ups Delhi Capitals at the Wankhede Stadium in Mumbai on April 10.