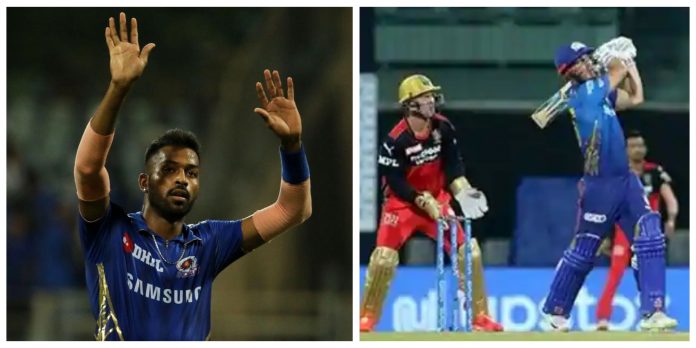 Playing purely as a batsman in Mumbai Indians’ triumph in the previous edition of the IPL, Hardik Pandya slowly returned back to bowling in India’s limited-overs series against England.

While he was expected to play a prominent role in MI’s defence in the second innings, he did not make it to the bowling mark, which meant that the team had to burn through the 20 overs with five bowlers.

Hardik Pandya’s workload management has been well documented, but as it turns out, the reason for his absence in the bowling department was a shoulder niggle. Following yet another defeat in the season opener, Chris Lynn elaborated why the all-rounder was not given the ball.

“I’m not a hundred percent sure but it’s a bit of a shoulder niggle. I think Hardik Pandya, not bowling is maybe more precautionary. He’s played a fair bit of cricket leading up to this tournament, in which he has to play (minimum) 14 games as well.

“So you don’t want to throw your eggs in one basket and risk injury. The physios and the staff doctors will treat Hardik if there’s something wrong,” Lynn was quoted as saying by Sportskeeda.

The Australian opener, who scored 49, and was the leading scorer for MI, also opined that the team desperately missed the presence of a potential sixth bowler in the side while defending 160. Rahul Chahar, in particular, had a dismal evening after going for 43 runs without a wicket in return.

“He is a huge factor with the bat but if he gets bowling, then it adds another dimension to the team. We might have been missing the sixth bowler tonight but it’s early stages in the tournament. I do believe if Hardik is bowling then it brings out confidence in his batting as well. So fingers crossed we’ll see him with the ball sooner rather than later,” he added.

The all-rounder did not have an eventful outing with the bat as well following a short 10-ball stint in the crease which yielded 13 runs. His innings was brought to an end by a tame full toss by Harshal Patel, which struck him right in front of the stumps for an LBW.

The defending champions could well use a bowler like Hardik Pandya in the early stages of the tournament given that they will be playing their games in the slow tracks of Chennai. Well equipped with cutters, the all-rounder could be a handy weapon in the middle and death overs for MI.