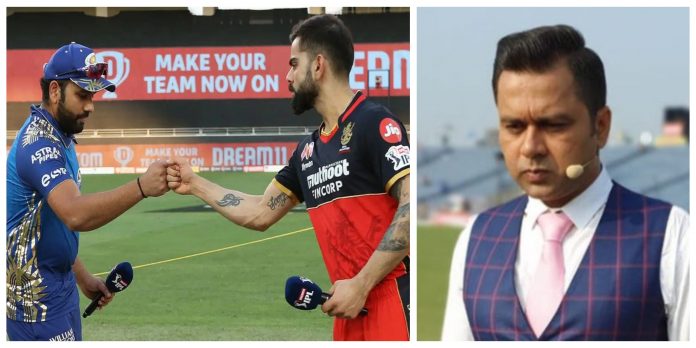 Rohit Sharma and Virat Kohli will lead their respective sides in Chennai tonight to kick off the tournament. While the defending champions were dormant in the auctions, their counterparts went on a spending spree to revamp their squad once again. Ahead of the highly-anticipated clash, former India opener Aakash Chopra made a bold prediction pertaining to the batting stars of both sides.

The former batsman claimed that Rohit Sharma and Suryakumar Yadav will collectively score more than the pair of Virat Kohli and Glenn Maxwell. He also added that the RCB skipper might score the same runs as Rohit and Yadav as well.

“SKY and Rohit will together score more runs than Kohli and Maxwell. That’s what I feel although Kohli alone might score the same runs as SKY and Rohit,” he opined

Chopra also added one of the openers from both teams will go on to make more than 30 runs in the game. With Rohit and Kohli both opening the batting for their teams, Chopra feels that they could be the batsmen that get firing because of the form they are coming with in this game.

Both Kohli and Rohit enjoyed a relatively healthy series against the visiting England side and are in rhythm following consistent cricket for the past few months.

“One opener from each team will score more than 30 runs. It is possible these two openers could be Kohli and Rohit because both are coming with good form and continuous cricket behind them,” said Chopra on his YouTube Channel.

The Chennai track has generally favoured the spinners since its inception and that has prompted Chopra to proclaim that they will scalp more wickets than the pacers in the opening encounter. The pitch is said to be prepared of black soil rather than red soil for a healthy balance between bat and ball for an even contest.