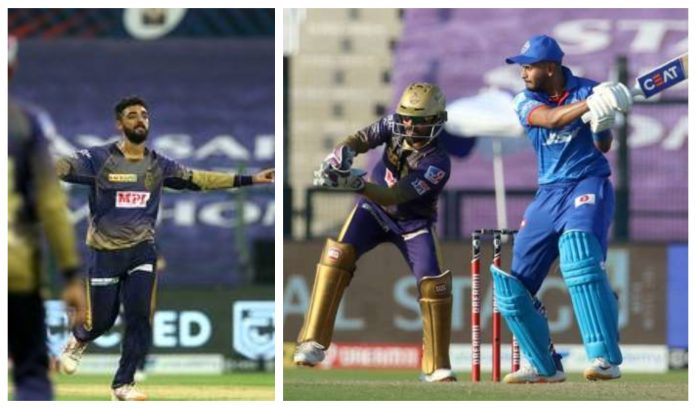 Coming from defeats in their earlier fixture, Delhi Capitals took on the Kolkata Knight Riders in Abu Dhabi. DC face pressure either side from Mumbai Indians and Royal Challengers Bangalore while KKR are clinging onto their number 4 spot.

Electing to bowl first after winning the toss, DC axed Prithvi Shaw in favour of Ajinkya Rahane and brought back speedster Anrich Nortje in place of Daniel Sams. KKR, on the other hand, dropped Kuldeep Yadav and Tom Banton to rope in Kamlesh Nagarkoti and a returning Sunil Narine.

Nitish Rana was promoted to open the innings who repaid the franchise’s faith with a fifty. The left-hander lacked aid from the top order batsmen who put up a tame fight against the rampant in-form DC pacers.

Shubman Gill, who started the innings on a good note with a couple of crisp boundaries, was out after a soft dismissal to prolong his slump. Rahul Tripathi was undone by a scorching yorker from Nortje who claimed his second wicket of the match. Former skipper Dinesh Karthik’s poor patch continued as well following his 7-ball 4-run innings.

Reeling at 44-3 after 8 overs, KKR were staring down a mediocre total. However, Sunil Narine coming in at No.5 changed the complexion of the match. The duo shared a formidable 115-run stand for the fourth wicket. Following death over antics by Rana who scored 81, KKR managed to register 194-6 in their 20 overs.

KKR stepped up with a stunning bowling performance

Often criticized for his powerplay bowling, Pat Cummins struck off his very first ball to dismiss the struggling Ajinkya Rahane. The Australian pacer struck once again to scalp the wicket of twin centurion Shikhar Dhawan for just 6.

Shreyas Iyer was joined by Rishabh Pant at the crease who struggled to get going on a track that slowed with time. The wicket-keeper batsman had a rough time out in the middle with a sluggish 27-run ball knock that consumed 33 balls.

After Cummins’ initial onslaught in the beginning, Varun Chakravarthy took over the reins by taking out the entire middle order. Skipper Iyer’s lone 48-run knock was ended by the spinner who also took the wicket of Hetmyer, Stoinis and Axar Patel.

The former KXIP bowler registered the best bowling figures this season as KKR romped to a huge win over DC.