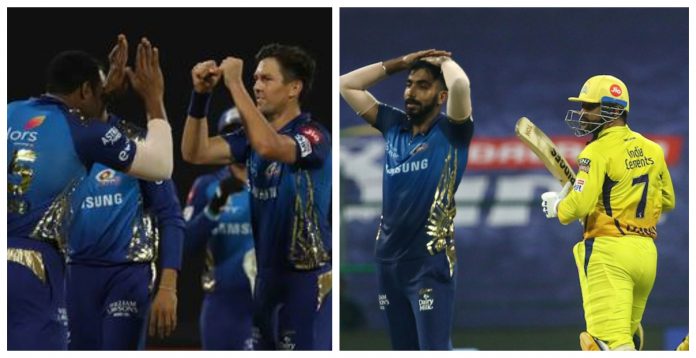 Sitting at polar ends of the points table, Mumbai Indians and Chennai Super Kings tussled at the iconic Sharjah stadium. In a bout, that lasted just over 30 overs, MI proceeded to dominate their rivals and leapfrog onto the pole position leading into the fag end of the competition.

Regular MI captain Rohit Sharma had to miss the fixture owing to injury. In the absence of the Hitman, experienced campaigner Kieron Pollard took over the captaincy reign with Saurabh Tiwary being the only change in a consistent lineup that has been on display throughout the season. 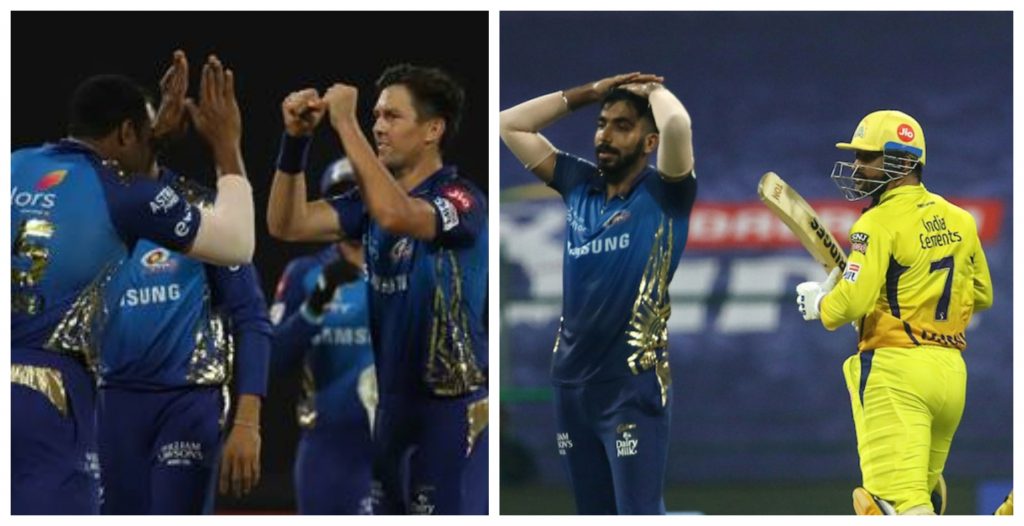 MS Dhoni, in a stark contrast had to shuffle through a thin contingent to match the prowess of the relentless MI. N Jagadeesan, Ruturaj Gaikwad and Imran Tahir were introduced into the line-up while Kedar Jadhav, Piyush Chawla and Shane Watson were dropped. MI won the toss and elected to bowl first.

CSK hit a new low bordering on humiliation after being reduced to 3-4 inside three overs. A beligerent first over from Trent Boult saw the dismissal of Gaikwad who could not cope up with the movement off the pitch.

Bumrah joined the proceedings with twin dismissals in his very first over with the scalps of Ambati Rayudu and N Jagadeesan off successive balls.

MS Dhoni became the first player in the batting unit to hit double figures in his run-a-ball 16 before getting out to Rahul Chahar. Sam Curran waged a lone battle to avoid further humiliation as the all-rounder hung around with the lower order to cross the 100-run mark.

Curran’s efforts were rewarded with a personal landmark following crossing the fifty run mark as CSK ended with 114-9 in 20 overs.

Having already possessing a superior net run rate compared to the other seven teams, MI got a further nudge by chasing the meagre target in just 12.2 overs without the loss of a wicket.

In the absence of Rohit Sharma, Ishan Kishan was entrusted to open the innings alongside Quinton de Kock. The pair shared a stellar 116-run stand to inch closer to seal their place in the playoffs of the competition. Ishan Kishan thrased the hapless CSK bowling attack to all corners of the park during his explosive 68 run knock off 37 deliveries.