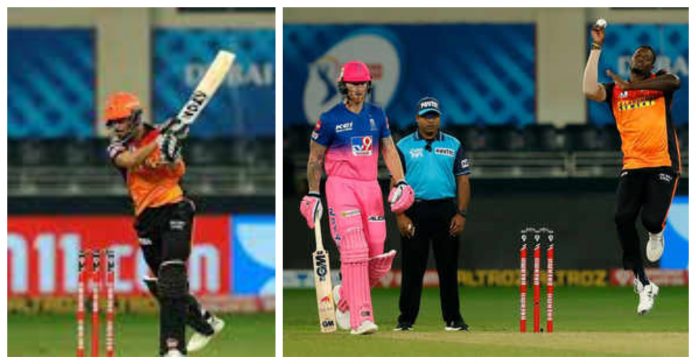 Vying for a late surge to claim the fourth spot in the table, Sunrisers Hyderabad and Rajasthan Royals battled out in a crucial encounter in Dubai that might seal their fate.  SRH were able to secure 2 vital points and cling on to their hopes of making it to the playoffs.

Coming after their crushing loss to Kolkata Knight Riders, Sunrisers Hyderabad once again opted to bowl first. Skipper David Warner announced at the toss that Jason Holder will make his maiden appearance this season after coming in as a replacement for the injured Mitchell Marsh. The change was made with Kane Williamson being injured while left-arm spinner Shahbaz Nadeem was included in place of Basil Thampi.

Sticking with their fifth opening pair to be tried out in the competition, Rajasthan Royals showed some spark in the early overs. The spark soon died out after a colossal mix up that saw Robin Uthappa being run-out in the fourth over. Sanju Samson, currently going through a bad patch after his initial shot lived purple patch, looked in good touch during his knock of 36. The batsman was undone by a clever off-cutter by Jason Holder.

Ben Stokes massively struggled at the top of the order and departed for a 32-ball 30 run inning that was ended by Rashid Khan. The leg-spinner was at his consistent best with a stellar spell that read 1-20.

T.Natarajan did not have the best of outings after giving away 46 runs without a wicket to his name. After being 74-1 in the halfway stage, RR staggered in the second half with 80-5. A brief cameo by Jofra Archer helped them cross the 150-run mark.

Jofra Archer bowled a fiery first spell that induced the wickets of the dangerous SRH opening pair of David Warner and Jonny Bairstow.

Promoted to number 4, Vijay Shankar played the anchor as Manish Pandey unfolded a masterclass at the other end. Initially targeting young Kartik Tyagi to bring the asking rate down, Pandey romped his way to his fifty off just 27-balls.

The pair shared a sensational unbeaten 140-run stand to steer SRH home with eleven balls to spare and drag down RR in their pursuit of climbing up in the table. Pandey hit eight sixes during his 47-ball 83 run inning while Shankar scored a fifty as well off 51 balls.