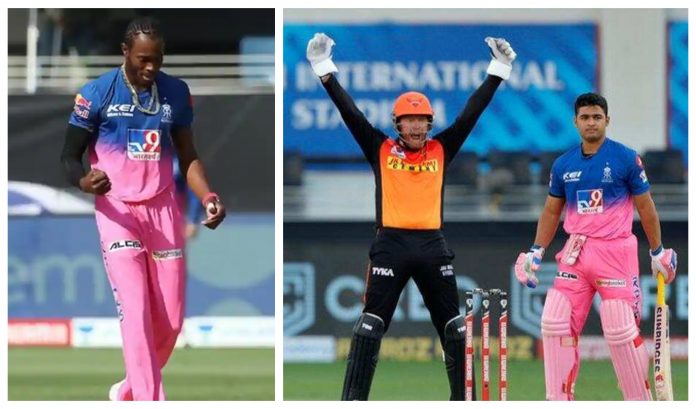 Sticking with the momentum and returning back to form were the main things on the agenda for Sunrisers Hyderabad and Rajasthan Royals respectively, as they took on each other for Sunday’s first encounter in Dubai. RR won the contest with one ball to spare thanks to Rahul Tewatia and Riyan Parag’s heroics.

Playing on the same surface that hosted yesterday’s encounter, David Warner elected to bat first after winning the toss. Vijay Shankar was back in the team in place of Abdul Samad. Fellow Australian skipper Steve Smith named four changes to the team that suffered a loss against Delhi Capitals. The franchise welcomed back Ben Stokes in place of Andrew Tye. Apart from Stokes, the other players brought into the playing eleven were Jaydev Unadkat, Robin Uthappa and Riyan Parag. 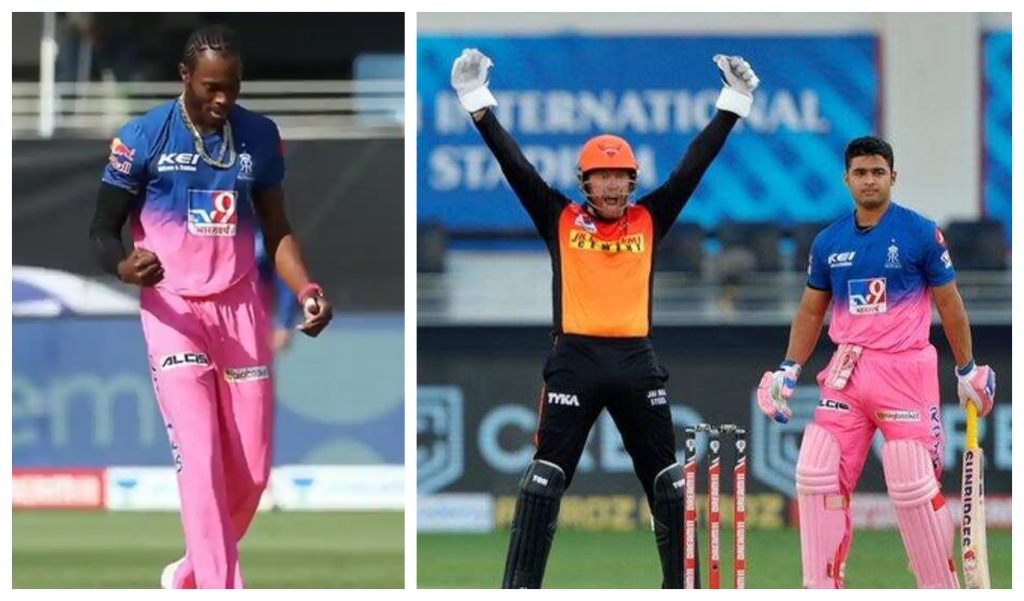 RR enforced a tight powerplay with a fiery spell from Jofra Archer upfront. Their efforts were rewarded as Jonny Bairstow holed out to the deep following a struggling knock of 16.

Manish Pandey and David Warner played out a 73-run partnership for the second wicket. Despite being slow in their appraoch, it laid a solid platform for the rest of the batting order. Warner missed out on his half-century by 2 runs after Archer procceded to get past his defence and shatter the wickets.

Manish Pandey dug in for his second fity of the tournament while death over hitting from Kane Williamson and Priyam Garg enabled SRH to post 158-4 on the board.

Tewatia and Parag snatch victory from the jaws of defeat

RR mixed things up by introducing a change in the opening pair. Ben Stokes accompanied national teammate Jos Buttler at the top. While the all-rounder looked in good touch with an early boundary, his stay was short at the crease after dragging one back onto his stumps off Khaleel Ahmed’s length delivery.

Their top order woes continued as Steve Smith too departed early following a run-out. Smith’s full fledged dive was not enough which brought in early pressure in the chase. Things took a turn for the worse following Buttler’s wicket that reduced them to 26-3 in the fifth over.

Sanju Samson and Robin Uthappa, a pair searching for form joined at the crease to make something of this uphill task. The partnership did not last long and was ended by the in-form Rashid Khan, who trapped Uthappa LBW for just 18. The leg-spinner struck again in his next over by dismissing Sanju Samson to strengthen SRH’s cause.

However, a stunning 85-run stand shared by Rahul Tewatia and Riyan Parag saw the contest tilt in favour of RR. The all-rounder scored 45 while the youngster chipped in with a valuable 42 to register this edition’s highest 6th wicket stand and help RR win their first match following four consecutive defeats.