IPL 2020 saw its second super over with just ten matches in so far after heavyweights Mumbai Indians and Royal Challengers Bangalore were inseparable after 40 overs of riveting action. Ishan Kishan and Kieron Pollard nearly dragged Mumbai to a winning position over RCB after all seemed lost.

Mumbai Indians named a solitary change as Ishan Kishan was roped in for Saurabh Tiwary in the middle order.

Aaron Finch was at his destructive best for RCB early on in the innings. Devdutt Paddikal tagged along as the anchor with Finch in top form. Australia’s limited-overs skipper brought his fifty in quick time but was dismissed right after reaching the landmark.

The dismissal saw a slump in scoring with new batsman Virat Kohli struggling to get any sort of rhythm. The RCB skipper did not have the greatest outings after a soft-dismissal brought an end to his painful stay. Kohli could only muster 3 off 11 balls to leave the team at 92-2 after 12.2 overs.

While Padikkal registered his second IPL fifty in three matches, de Villiers elevated the game with outrageous hitting, taking world-class bowlers such as Boult and Bumrah to the cleaners. The South African remained unbeaten for an innings defining knock of 55 off 24.

RCB managed to score 70 runs off the last 4 overs which was propelled by an impressive 10-ball 27 run cameo by Shivam Dube. The all-rounder hit 3 sixes in the final over to nudge RCB over the 200-run mark. 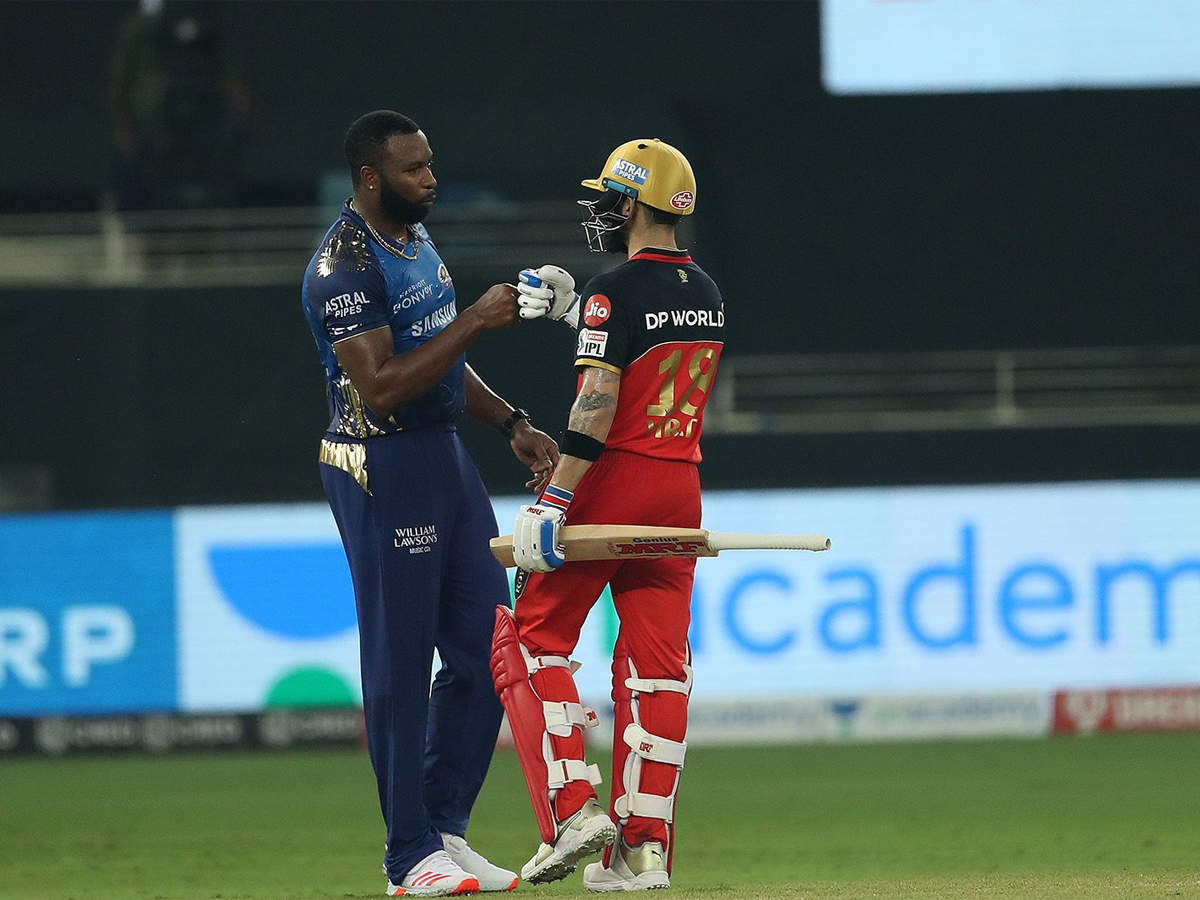 Despite an expensive first over, RCB were on point with their plans in the powerplay. Washington Sundar snapped up the all-important wicket of Rohit Sharma, who narrowly failed to clear the mammoth 81m square leg boundary.

The top order failed to make an impact following Suryakumar Yadav’s dismissal for a duck and de Kock’s short stay for 14 runs. Playing his first match of the competition this year, Ishan Kishan made his intentions clear with a first-ball boundary and looked in sublime touch.

With 80 runs in 4 overs, the required run-rate favoured RCB. However, Kieron Pollard brought MI back into the chase after smashing Adam Zampa for 27 runs in his final over. The pressure was piled on the bowlers as runs leaked towards all corners of the ground courtesy of some exemplary hitting from Kishan and Pollard.

The equation was down to 19 runs off the final over, and despite only 2 runs coming off the initial 2 balls, Kishan turned things around successive sixes. The wicket-keeper missed out on a third successive maximum and a well deserved century after getting caught in the deep. Kishan’s sumptuous bat swing was in full display during his innings of 99 that included nine sixes and two fours.

Isuru Udana had to defend 5 runs off the final ball and conceded a boundary off Pollard to stretch the game into super-over.

Batting first in the super-over, Mumbai Indians could only manage 7 runs following a barrage of yorkers and low full tosses by Navdeep Saini. Jasprit Bumrah was able to stretch things to the last delivery before Virat Kohli finished things for RCB and notch up 2 vital points.