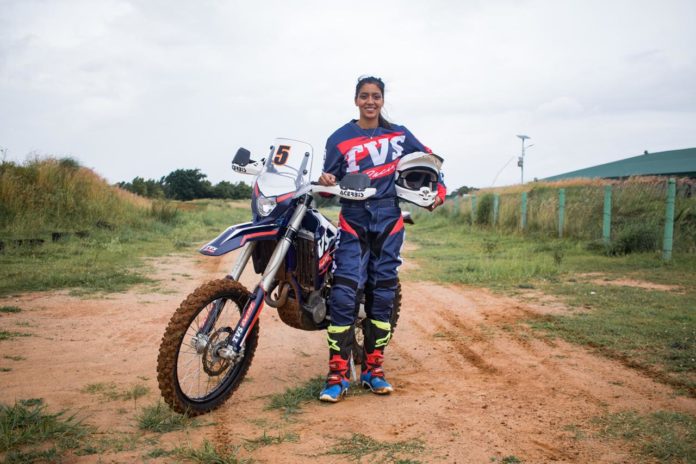 IOS Sports & Entertainment, country’s leading sports management group, today announced the signing of champion Indian circuit and off-road motorcycle racer Aishwarya Pissay. She became the first and only Indian to win a World Title in two-wheeler motorsports last year when she won a gold and silver medal in the Women’s and Junior’s event respectively at the FIM Baja Women’s World Cup 2019. 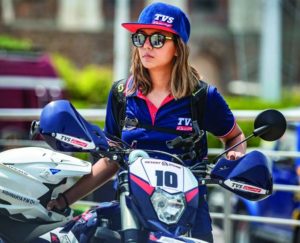 In her short career, the urban Bengaluru based racer has had a meteoric rise to the top as she has consecutively been winning the National Rally Championship and the National Road Racing Championship since the past 4 years. Aishwarya also triumphed in the Maruti Suzuki Dakshin Dare competition and the Raid De Himalayas Women’s competition in 2017 – with the latter known to be the most difficult race in Indian motorsports.
Adding to her impressive tally, she also won the TVS One Make Championship in 2017. Given her exceptional track record and consistent performances, TVS Racing signed Aishwarya as an exclusive racer later that year.
‘Miss Pissay’ as she calls herself on social media, has also won the prestigious FMSCI Outstanding Women in Motor Sport Award for the last four years running. On being presented the award earlier in February by Honourable Sports Minister Kiren Rijiju, she said, “It was an honour to be felicitated and recognised by Kiren Rijiju Sir.”
Aishwarya, aged 24, is at the peak of her career and has a glamorous persona off the circuit. She takes to social media well and has featured on various magazine covers like Harper’s Bazaar India, Cosmopolitan and Smart Life.
On signing the motorcycle racer, Neerav Tomar, MD of the company said, “We would like to welcome Aishwarya Pissay to the IOS family. At a young age, she has proved her potential on the motorsports circuit. And we hope to serve her in the best possible way.”

On signing with IOS, Aishwarya Pissay said, “I’m excited to be part of the finest and most reputed sports management group in the country. They have a proven record and I look forward to a great association with them.”