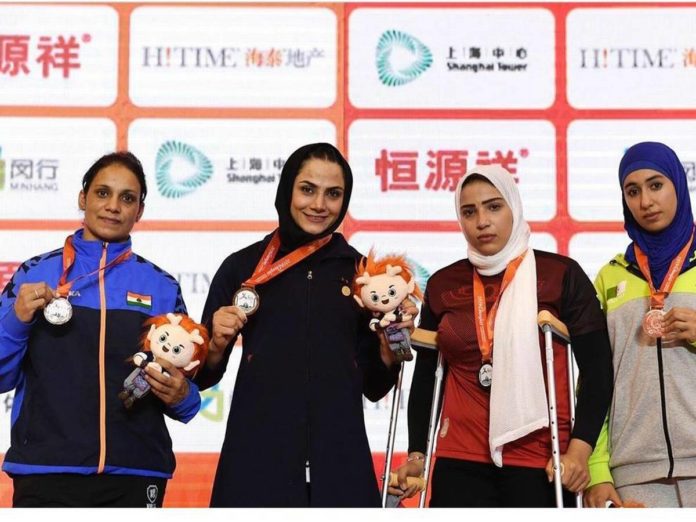 Martial artist Poonam Khatri, who won a silver medal at the Wushu World Championship, has now been acknowledged as the gold medallist. Her medal got promoted after Iran’s Maryam Hashemi failed her anti-doping test.

Maryam won the gold medal in the Women’s Sanda event at this Championship last year in October. She defeated Poonam in the 75 kg category in the final which was held in China. A four-time world champion, Maryam has received a four-year ban after testing positive for the anabolic steroid nandrolone, according to a report by Tehran Times.

Poonam Khatri over the years has acquired a status for being an all-round consistent performer at the national and international levels. In addition to her recent World Championship heroics, the 33-year-old who storms from Haryana’s Jhajjar district also won a gold medal in the 2019 South Asian Games and is also a 10 time National Champion.

Poonam Khatri in her interview with Sports India Show talked about her gold medal, her family,  her training, and her future in wushu championships.

She was praised on winning the gold medal and was asked about how she is feeling to which she replied:

“I am very happy obviously on winning the gold medal. I want to thank you guys for taking my interview and giving me this chance to share my happiness with other people on getting my medal upgraded to gold. The level of happiness is just on a different level can’t express it right now. The commission and the higher authorities emailed me and called me giving me the information that my opponent in the last year world championship finals has failed her drug test and I’m getting my silver medal upgraded to gold due to this.”

“The committee emailed me about it that in Tehran times the news came that Maryam who defeated me in the final of the world championship of wushu has failed her anti-doping test and therefore I’ll be the new champion has she will be stripped of her gold medal. I’m happy for it but the happiness would have been different if I could have defeated her in the finals fair and square. I also felt bad on her part that she won the medal and shouldn’t have done cheating during that period than the final would have been legal. At such an international event this type of thing is not legal to do and you shouldn’t cheat in such a manner it doesn’t look good.”

She was asked about her training and her job during this pandemic she said:

“After winning several championships in wushu I got the job from the sports section in the police department so there’s no pressure of the job. All we have to do is practice well and focus on our game. In the facility where we stay, we have everything there for us form gyms to coaches and places to stay. So all we do is work hard and focus on improving.”

She also talked about her last year’s world championship and her further practice after becoming the new champion now and also about her opponent Maryam.

“As of now, I am the new champion this brings new challenges in front of me. Form my last defeat in the finals I learned a lot. I learned about my game my flaws and my strengths in which field I have to work hard. Maryam is a very good fighter. Before the world championship, I was very nervous but my coaches had my back and told me not to be scared and do my best. She had better footwork than me because she got more points. But since she has been suspended for I guess 4 years but when she’ll come back I want to fight her and win against her fair and square and avenge my loss.”

She talked about her family’s support in her career:

“My husband and my entire family play a huge role in my success. Mainly in recent times after I become a mom I have this cute little girl at home who misses her mom when she’s out so all this is hard for me I keep thinking about my daughter when I’m out for tournaments but my husband and my family tell me that I shouldn’t worry about her and focus in the game that gives me confidence and strength to work hard and make my family proud.”

“The gold medal has now given me more reasons to work hard as now I have to defend my place in the world championships this year. The 2020 world championship has been postponed now but whenever they’ll announce the dates I’ll be ready to defend my gold medal. I am working really hard this time I’m working hard on my distance control and footwork which will be key in my game this time. I’ll also be waiting for Maryam after she comes back from suspension. The gold medal has just worked as a huge source of motivation for me.”