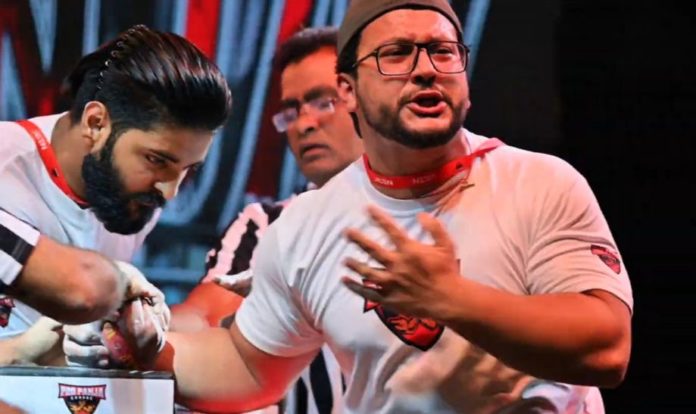 The Pro Panja League which held its inaugural season at the end of February has made Arm Wrestling in India an absolute fan favorite sport.

The event was a massive success and to give an idea to our readers as to how big this event was, Mr. Kiren Rijiju (current Minister of State of the Ministry of Youth Affairs and Sports), Indian boxing star and current WBO Oriental and WBO Asia-Pacific super middleweight champion Vijender Singh were also present at the event. 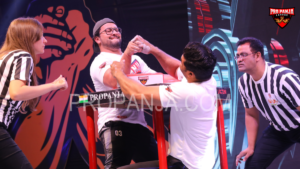 Arm Wrestlers from across the country took part in the event and one wrestler was the absolute star of the event. It was the 90kg silver medalist, Harman Mann. Even if he may have lost in the finals to Siddharth Malakar, the powerhouse from Punjab managed to capture the minds of the audience.

Hailing from Nawanshahr, Harman gave Arm Wrestling fans in a viral moment during his prelims bout. In this bout, an opponent had Harman’s right hand almost pinned, but the Nawanshahr native bounced back and pinned his rival and then later burst into emotions. It was without a doubt one of the most iconic moments of the inaugural season of Pro Panja League.

Owner of the Pro Panja League, Mr. Parvin Dabas had a nice chat with Harman Mann about his experience in Delhi and the importance of personality in building upcoming sports stars.

“When you [Parvin Dabas] gave the speech that how much the personality of the athletes’ matter, I was very happy because I knew I was the best and had the ability to promote myself,” Harman said.

“I have done this [emotional outburst] in so many other competitions and I enjoy this very much since everything is raw and genuine,” he added.

Harman Mann had a terrific run throughout the prelims, however, he met his match in Siddharth Malakar in the finals and eventually lost in a hard-fought fight. He talked about his finals match and what went wrong on February 29 in Delhi.

Harman also added the fact that he hadn’t had a proper training camp heading into the Pro Panja League.

“I started training after the date for PPL was confirmed. Last year around November/December I was very busy…from morning 6 am I had to work and start training new people that enrolled at my gym…so I was extremely busy.

“But right now I am training hard and giving more time to myself and focusing on my technique, So I am hoping that I can beat Siddharth Malakar next time and bring back a gold medal,” Harman said.

It’s important to note that so far only ranking tournament have taken place and the main tournament that will be for the PPL belt is yet to happen.

With that being said, Pro Panja League is also planning to host a series of super matches in tournaments taking place in the near future. There have been previous talks about Harman Mann fighting 100kg silver medalist Sanjay Deswal in a super match.

“I am ready to take on Sanjay Deswal because we have fought before as well. Last time we fought back in 2018 and he is an extremely good player and the star player of Delhi and he always performs well in Nationals and this is an opportunity for me as well and it’s always good to test yourself against a good player and I am very excited about it,” He added.

While Harman admitted the fact that he doesn’t like to pick and chose his opponents, he said that he would like to fight 100kg champion Sunil Kumar and also 110+ kg champion Dilshad MA.

“There are few players who I would like to test myself against….one of them is Sunil Kumar, he is a great player and even if you lose to someone like Sunil Kumar it doesn’t matter because it’s a great experience to even be in the same table as him. Then there’s a 110+ kg champion Dilshad,” Harman Mann concluded.