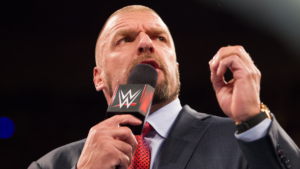 Despite D-Generation X coming out victorious against The Brothers of Destruction last week, Crown Jewel did not prove to be a smooth sail for Triple H. The Cerebral Assassin was chokeslammed by The Undertaker on to the announce table and in a recent statement released by WWE, it was stated that Hunter seemingly sustained a torn pectoral muscle.

Here’s how Triple H got injured:

Triple H, however, managed to continue and finish the match, as he delivered a pedigree to Kane and picked up the pinfall for DX. The COO of WWE is expected to undergo surgical repair and could remain on the sidelines for a considerable period of time.

If things don’t pan out accordingly then The Game could be in danger of missing out on Wrestlemania 35. On SmackDown 1000, at Evolution’s reunion, Batista teased a potential match against Triple H at the showdown event next year and mentioned that the 14-time World Champion had never beaten him in singles competition.

The Animal’s remarks hit Triple H’s nerve as things got momentarily heated between the duo before both of them put bad blood aside and embraced each other. Batista previously beat The Game at Wrestlemania 21 in 2005 and a rematch in April 2019 would be the perfect comeback story for the former four-time WWE World Heavyweight Champion.