Team India will play their first-ever Day-Night test away from home and their second one overall after Cricket Australia released the list of fixtures to be played between the two teams next month.  The Men In Blue will contest in 3 ODIs, 3 T20Is and 4 Tests during their time Down Under along with a warm-up match.

The Indian contingent is expected to travel to Australia right after the IPL final, which is slated to take place on November 10. A 14-day quarantine-training period starting from November 12 will have to be implemented by the team ahead of the series involving all three formats.

The highly-anticipated tour will kick off with the ODI series starting from November 27 with Sydney Cricket Ground allotted to host the first 2 matches before the series culminates at the Manuka Oval in Canberra.

The 69-day tour will proceed with the series of the shortest format of the game where SGC will host two-fixtures, much like the ODI series.

Having only played a solitary Day-Night test, India will contest in a Day-Night warm-up game in Sydney before gearing up to face Australia in Adelaide with the pink ball to kick off the Border-Gavaskar series. 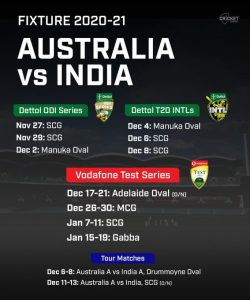 The acclaimed Boxing Day test will take place at the Melbourne Cricket Ground as per tradition with the prospect of the inclusion of fans.

“In relation to the Boxing Day Test at the MCG, we are working with the Victorian Government and the Melbourne Cricket Club on plans to safely host spectators at the iconic event with details to be confirmed in due course.,” CA said in a statement

There will be a one week gap between the boxing test and the fourth and final test in Sydney as per the demands of the BCCI.

India’s tour to Australia will be broadcasted on the Sony network starting from November 27. The ODI matches are expected to start from 8:30 PM IST whereas the T20 fixtures and the test series will commence from 1:30 PM IST and 5:00 AM IST respectively.

CA reserved praise and expressed gratitude towards the Indian cricketing governing body, BCCI for their support.

“We have worked closely with the BCCI for many months to bring this tour to life, and I cannot speak more highly of the professional, thorough and collaborative manner with which they have approached this tour in these extraordinary and complex times.

“I would like to express my gratitude to everyone at the BCCI for the faith and support they have shown in the plan we have developed, which we believe will result in a safe and successful summer for all involved.

Dec 6-8: Australia A vs India A, Drummoyne Oval

The BCCI had announced the squads for all the three formats on Monday through a virtual conference call. The squads were under the scanner instantly with the unexplained notable absence of Rohit Sharma and yet another blind eye turned towards Suryakumar Yadav.

Rishabh Pant was dropped from the limited-overs squad while the IPL success of Varun Chakravarthy was rewarded with a maiden call up to the side.