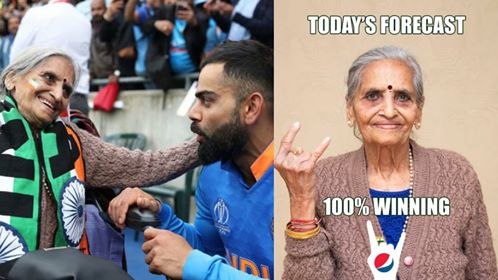 When India played Bangladesh last Tuesday, the cameras spotted a super fan of the Indian cricket team. It was an 87-year old woman, Charulata Patel who was cheering for the Indian team in Birmingham. It took her no time to become an internet sensation. Virat Kohli and Rohit Sharma were seen interacting with probably the oldest fan of the Indian team.

Virat Kohli even shared a photo with her on his social media handles. And now, the 87-year old has again made it to the headlines. Soft-drink company Pepsi co. have collaborated with Charulata Patel for a digital campaign.

Giving details about this collaboration, a spokesperson of Pepsi said, ” Pepsi has always believed in reinventing to create experiences that connect with the masses. In February, Pepsi launched the ‘Har Ghoont Mein Swag’ campaign. This campaign targets self-belief in today’s India. This self-belief includes living in the moment, seizing new opportunities and doing it all with swag that defies any age.”

“Pepsi salutes the undying SWAG of the Indian cricket fan and is honoured to bring the story of a super fan like Charulata, who is 87-year old. She defies the age factor and has shown that there is no bar when it comes to living in the moment. Pepsi is proud to collaborate with her for a unique digital campaign,” he added.

Celebrating the swag of the Indian cricket fan #HarGhoontMeinSwag pic.twitter.com/h0zT5WUELc

Charulata Patel revealed that she has been a follower of the game for a long time when she gave an interview to ANI. She also said that she was in the stadium when India lifted the cup in 1983. She used to live in Africa until 1975. The fan has been following the game right since her time in Africa. In the first few years in England, she was working and could not follow the game. But now that she isn’t working, she has been following the game Cricket.

Michael Vaughan had shared a photo of Charulata Patel on his Instagram handle. He had described the photo as the “picture of the World Cup” for him.