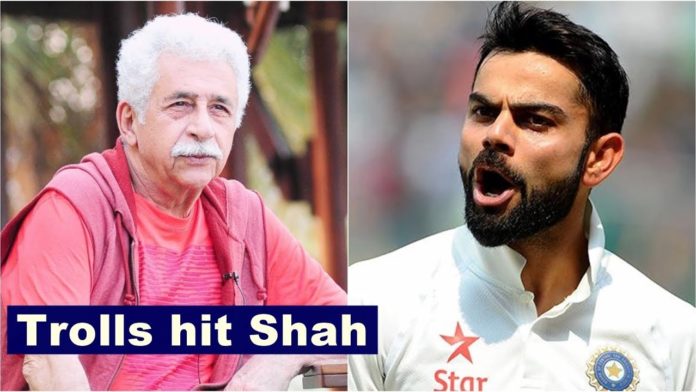 He then added by saying that Virat Kohli’s cricketing brilliance ‘pales’ in front of his ‘arrogance and bad manners.’ Shah concluded the post by saying that he doesn’t wish to leave the country. 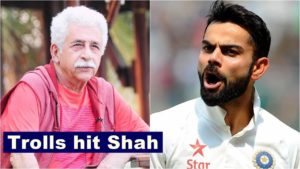 It all started after Kohli and Paine got involved in a verbal spat during day 4 of the ongoing cricket series down under. Even the on-field umpire Chris Gaffaney had to interfere and gave a stern warning to both the players.

Virat Kohli fans were clearly unhappy with Shah and they came together to show their anger on Social Media.

I have personally been witness to a watchman getting publicly thrashed by #NaseeruddinShah outside a famous theatre because the watchman did not allow his car inside the premises as per their rules. Absolute ruffian, now playing victim & trying to create a narrative!! @imVkohli https://t.co/vOjfcion5M

Hey Naseeruddin… I m a minority in this country and feel completely safe under this govt..yes I did feel scared in 1984 when your political masters butchered my community and there wasn't a whimper from your side..I guess you were sleeping then!! #NaseeruddinShah @imVkohli pic.twitter.com/CWAvS9dXE1

According to Naseeruddin Shah Virat Kohli is a "bad boy" but Mumbai blast accused Yakub Memon is a "good boy" upon whose mercy petition Naseeruddin signed. Some people can't just rise beyond religion. #NaseeruddinShah #NaseeruddinvsVirat @imVkohli

Right in the face of #NaseeruddinShah and all you haters! 🥊

Who's that #NaseeruddinShah to question @imVkohli . He is the captain of Indian Cricket team, Our national proud. This is the same Shah who three years back statemented that being a Muslim he is targeted, insulting his Hindu appriciater who made him to stand at this position!

With all due respect Naseeruddin Sir, It takes a lifetime to build reputation, only a moment like this to ruin it altogether.

P.S.- Did you just forget Javed Miandad or for that matter Moin Khan?? And what about the entire bunch of Aussies?#naseeruddinshah @imVkohli pic.twitter.com/2xfOECBuKq

dear naseeruddin shah, I'm a huge fan of your acting but as far as cricket is concerned you don't have any knowledge about it and I request you to please stay out of it. #naseeruddinshah #viratkohli pic.twitter.com/deNbjkNibe

It is not bad behaviour on Virat Kohli's part, it is the assertiveness of modern sport. And it is still far better to watch a badly behaved cricket legend than to suffer an ugly actor well past his prime. And Kohli has much to be arrogant about, unlike N Shah. #naseeruddinshah

We all know @NaseeruddinShah is Gulfam Hasan (Sarfarosh) in real life too. So who gives a shit about his opinion on @imVkohli. #naseeruddinshah

Let me assert that if a supersucceful world beater @imVkohli is worse behaved, we need more of young Virats to thumb their noses at white supremacist west. 👍✌️
BTW I respected #NaseeruddinShah bcos he was typical bad boy of Indian cinema slamming people 4overlooking his talent😄

Someone please show these pictures to Mr. Shah. pic.twitter.com/Kp94tGyCwu

Naseeruddin Shah is jealous because what @imVkohli has achieved at this age, Shah has not achieved that during his whole acting career.

P.S: Naseer, this time you are not a voice of common men & this ones for you pic.twitter.com/1tfFEOTRTg

Virat Kohli's reaction when he came to know Naseeruddin Shah has called him as world's worst behaved player 🤪 #AUSvINDpic.twitter.com/L9rG6t7wh7

Look who is talking about behavior

Then, he insulted Millions of Hindus who made him a star

Attacking Kohli is his new Project

Attack on @imVkohli by @naseerudinshah is coz Virat praises & appreciates the work done by @narendramodi ji. Who is Naseeruddin to give an opinion & character certificate to Virat.

Lol !but we want to see virat kohli as a aggressive player only.
Just ignore this.#naseeruddinshah #ViratKohli pic.twitter.com/ySOkQhL7wS