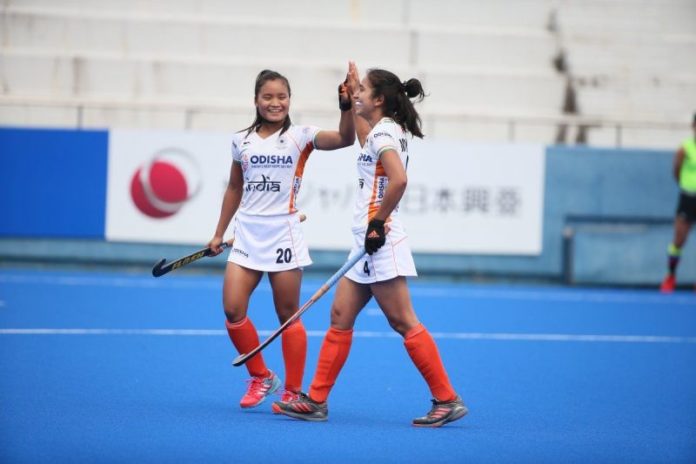 The Indian women’s hockey team took a giant step in qualifying for the Tokyo 2020 Olympics as they defeated Chile 4-2 in the semi-finals to reach the finals of the FIH Series in Hiroshima. They will face Japan in the finals, who has already qualified for the Olympics as they are hosting the quadrennial extravaganza.

India began the contest on a backfoot as they got the lead in the 18th minute. Four minutes later, India restored their parity thanks to Gurjit Kaur. Navneet Kaur and Gurjit’s strikes in the third quarter gave India a two-goal cushion before Chile reduced the gap in the 43rd minute.

Just when Chile were looking dangerous and on their way to score the equalizer, Rani Rampal took the game away from their hands as India won the game 4-2.

Team captain Rani spoke to the media after the victory, saying:

” THIS WAS A REALLY GOOD GAME FROM BOTH SIDES. ONE OF OUR PLAYERS LOST HER FATHER YESTERDAY. THIS MATCH IS DEDICATED TO HER FATHER SO THAT HE CAN REST IN PEACE.”

India topped their Group after battering Fiji 11-0 and picking up handsome victories over Poland and Uruguay. Chile, on the other hand, came into the match on the back of the victory over the other finalist Japan. However, they were stunned by World No. 25 Russia 5-2 in their last fixture.