LaLiga: Multiple students from India will be awarded scholarships in Spain annually

Mumbai, April 22nd, 2019 – LaLiga, in association with the Embassy of Spain in India and India On Track, will be awarding multiple Indian students the LaLiga Football Schools Scholarship annually from 2018/19 season onwards. The students will be selected from LaLiga’s unique grassroots development programme in India, LaLiga Football Schools and will be sent to Spain for up to a fortnight to receive high quality and impact training at a specially selected LaLiga club academy.

These students will be selected through a scouting process conducted every year around Diwali, where 32 players will be shortlisted. The final phase of the selection will be held the following January in a metro city location. The selected students will travel to Spain for an immersive football experience in May and receive training from the best of one of LaLiga’s club’ academies, sharing the training ground with some of Spain’s best youth players. The initiative will lead to the creation of a reward system for the best of talent from LaLiga Football Schools and provide the students with a progression platform for their football dreams.

The students will be selected based on their performance on the following criteria: technical skill demonstrated the history of progression and strong performance in LaLiga Football Schools, exemplary behaviour, attitude and strong sporting values like commitment, effort, team spirit, respect, teamwork and humbleness. 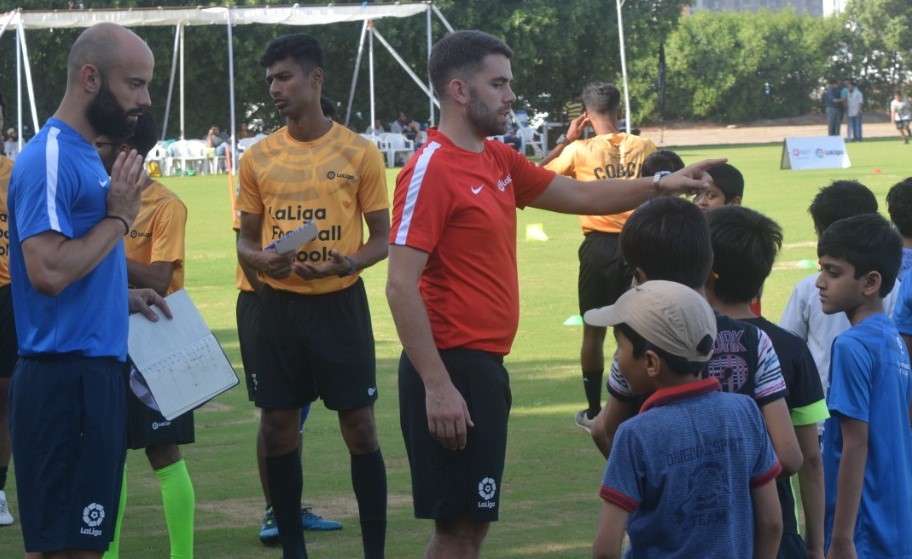 Jose Antonio Cachaza, Managing Director, LaLiga India said, “Our aim, at LaLiga, is to make a genuine and tangible impact on the lives of aspiring youth in India. We launched the first of its kind initiative to nurture the football environment in India keeping this in mind and have undertaken several other projects to actualise our dreams. The young students who will get the chance to visit Spain for a football immersion annually will come back here with a fresh perspective, set of skills and motivation and subsequently inspire more children to pursue their dreams. In turn, the young Spanish players will learn a little bit about Indian culture and its people.”

LaLiga Football Schools is a grassroots development initiative by Spain’s premier division league, LaLiga in association with India On Track to provide comprehensive training to Indian students and coaches across the country. Launched in 2018, the programme has benefitted more than 12,000 Indian students in 40 centres across 14 cities. Various additional initiatives like the launch of Summer Camps to increase the reach of the programme and Train the Trainer initiative, have helped LaLiga increase the impact of the programme on the football environment in the country.

Founded in 1984, LaLiga (Liga de Fútbol Profesional) is a sports association comprising the 42 teams that make up the first and second divisions of professional football in Spain. LaLiga, based in Madrid, is responsible for the LaLiga Santander and LaLiga 123 leagues and the television production, which in the 2016/2017 season reached more than 2.5 billion people globally. The association also has an active foundation and is the world’s first professional football league with a league for intellectually challenged footballers: LaLiga Genuine.