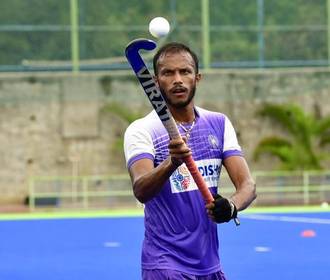 SV Sunil, who played for the Indian hockey team for nearly 14 years announced on Friday that he would be taking a break from the sport for some time. The hockey star will be missing from the field in the next national tournament. The 32-year-old is pretty sure that he still has enough left in him to continue playing such a demanding sport, but he thinks that he must take a short break. He was part of the team when they won the gold medal at the 2014 Asian Games. Sunil will be available to play in the shorter format.

“My body says I can still do it, my heart says go for it, but my mind says: Time to take a break. More than 14 years after I wore India colours for the first time, I’ve decided to make myself unavailable for the national camp which begins next week.”

Rupinder Singh and Birendra Lakra, both announced that they would be available for the next season few days before Sunil made the announcement.

SV Sunil penned an emotional note on Twitter, and addressed his fans that he he had wanted to be with the team when they win gold but unfortunately that didn’t happen. He admitted that winning a bronze medal is no less than an achievement but they could not help but regret missing out on gold.

“I will be lying to everyone, including myself, if I say I’m happy man. I always dreamt of helping my team to the podium at the Olympics and that would be the final hurrah. Unfortunately, it was not to be. That my teammates won the bronze medal is a special feeling, epic truly, even if it’s tinged with some sadness personally. But I know, this is the right decision. ”

SV Sunil not getting selected for the Tokyo Olympics team itself was a blow to his capability as a player. He doubted himself and his future. As one of the senior players, Sunil now thinks that it is high time that he must step aside to make way for younger talents who can unleash their power on the field.