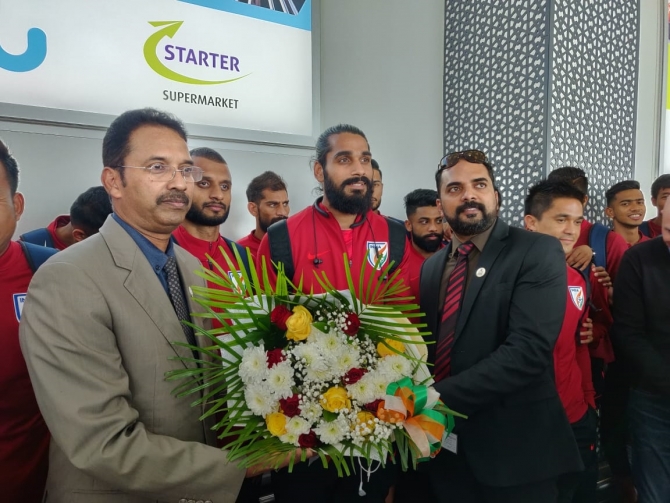 In case you missed out our yesterday’s edition of Indian football roundup, you can check it out here.

The Indian football team became the first contingent to arrive in UAE seventeen days prior to their opening match against Thailand in the 2019 AFC Asian Cup. No other team has touched down the Middle-Eastern nation. Officials from the Indian Embassy and some fans welcomed the 28-member Indian team and the coaching staff.

India will be making their fourth appearance in the continental extravaganza after missing out in the previous 2015 edition. After the match against Thailand, the Blue Tigers will cross swords against the hosts, UAE, on 10th January, and Bahrain on 14th January.

The All India Football Federation has canceled the friendly against Syria on 30th December in the run-up to the 2019 AFC Asian Cup. Instead, the Blue Tigers will now face a club-based side from UAE on the given day.

The Syrian media announced the same via a press release mentioning that India had apologized to them for canceling the match. The war-torn 74th ranked nation will now face Yemen on 30th December.

I-League: East Bengal come from behind to beat Churchill Brothers

East Bengal registered a wonderful comeback to pick up a 2-1 win over Churchill Brothers at the Tilak Maidan Stadium in the I-League. Willis Plaza drew the first blood against his former side when he connected Dawda Ceesay’s cross from the left wing in the 2nd minute to send the home fans in euphoria.

East Bengal retaliated by equalizing in the 35th minute through Jaime Santos Colado. Captain Lalrindika Ralte crossed the ball to the outside of the penalty box from a corner kick and, the Spaniard made no error in connecting the volley. The provider turned into the goalscorer in the 79th minute when everyone including the goalkeeper failed to read the trajectory of his cross-cum-shot from a 45-yard free kick.

National football team jersey: Where to buy them?

Indian football has become synonymous with Gaurav Mukhi thanks to the incessant reporting from the international media. Football Tweets, a twitter handle with more than 137,000 followers, tweeted the fiasco and soon international media outlets picked it up.

Mr. Prince Rufus, FIFA Regional Developmental Officer and Mr. Purushottam Kattel from AFC were present as the observers. The Rajya Sabha MP announced that the organization is finding sponsors to build a state-of-the-art National Centre of Excellence in Kolkata.

“The AIFF is also in the process of developing a state of the art National Centre of Excellence in Rajarhat, Kolkata. The land is in the heart of the city and work is slated to begin soon. It will cost us Rs. 200 crores and we are in talks with some corporates,” said Praful Patel.